Curiouser and Curiouser: The Mandrake Hotel in London

The Mandrake Hotel in London is a newcomer to the city’s boutique hotel scene, not even a year old at this point. It’s enigmatic, a hotel of curiosities, and if we could, we’d rename it The Mystical Mandrake.

You’ll find it in Fitzrovia, a diverse and super swanky area close to the West End, but don’t expect to see a big flashy sign indicating where it is. Instead, The Mandrake’s eye emblem sits above the entrance, to the right of a window display that stopped us in our tracks. A mystical creature in the window, some sort of feathered beast, lured us inside.

Imagined from the mind of Beirut-born Rami Fustok, a businessman and entrepreneur, The Mandrake is an eclectic, artsy hotel full of dark whimsy and a fashionable crowd with a guest list that includes plenty of recognisable names (a quick Google search will reveal who they are!). I had been hearing little snippets here and there about this new hotel and since it sounded exactly like the kind of spot where it would be one #caviarmoment after another, I was curious to step into the world of The Mandrake.

The property oozes sex appeal and naughtiness. For a first hotel venture, they have been über daring and pushed the envelope in all sorts of ways. Instead of front doors that open into a bright reception area, The Mandrake takes you down a long, dark corridor with a single piece of art illuminated at the end as your beacon.

When you reach that painting, you turn left into the reception area where the “wow” moments continue one after the other. The interior of the hotel makes you feel like you’ve wandered into the home of an eccentric private art collector, with curios and sculptural works scattered about and paintings decorating the walls. Even the glass lift keeps you immersed in the world of The Mandrake as intricate designs (created by tattoo artist Thomas Hooper) reveal themselves in the shaft as you go up and down.

But then when you find out more about Rami, it all begins to make sense. Born in Beirut and raised in London, he is the son of Bushra Fakhoury, a renowned sculptor know for her themes and inspirations rooted in myths, fables, carnivals, and parades. He spent much of his youth soaking up London’s street culture, particularly graffiti, and has always been immersed in the world of art. Opening The Mandrake was a passion project for him – a combination of his love for hosting and his passion for art.

The hotel was designed with the lead of Rami’s interior designer sister, Tala Fustok, and Culture in Architecture Interior Design, and it’s a bit of a family affair. The artwork around the hotel includes sculptures from Bushra and paintings by Malec Fustok, Rami’s brother, and the entire collection is one curated by Rami and sourced from around the world.

Although the hotel itself will steal most of the spotlight (and how could it not!), the staff can hardly be overlooked. Smart, polished, and extremely accommodating, they all had an entrepreneurial vibe that makes them exactly the type you want to have in a boutique hotel like The Mandrake. After all, working here isn’t for those who are just looking to clock in and clock out each day, doing only what’s listed on their job description.

This is where one of the greatest transitions occurs. In the hallways, there’s a fab New York vibe with bare brick walls, wrought iron stairs, and edgy cowgirl paintings. When you walk into your room, you’re suddenly brought in a cocoon of velvets and heavy drapes, vintage design pieces, and a wonderful bohemian-glam environment.

There are 30 rooms, ranging from the entry-level Mandrake rooms with double beds up to the Terrace rooms (where I stayed), in addition to three suites and the penthouse, at The Mandrake.

My room was cosy and chic, decorated in a palette of earthy greens and rich fabrics, giving it a royal vibe. There was a king size bed with crisp white linens (which are all made in Italy exclusively for The Mandrake), and a velvet loveseat and mirror-top coffee table at the foot.

Just like the rest of The Mandrake, my room held curious details that kept me on my toes. At first sight, the room seems perfectly normal for a boutique hotel – beautiful bed, lovely rug, a mini bar, a cosy floor lamp. But then you look around a bit more and suddenly notice a pair of Venetian masks peering down at you from atop the shelves. And then there’s the stunning unique glass chandelier hanging from the ceiling – not your typical overhead lighting!

The bathroom was more of a classically modern design, with a black and white marble countertop in the sink/vanity area and lighter grey tiles for the backsplash and rainfall shower. Grown Alchemist products and bud vase with a pink peony added the finishing touches to the small but elegant space.

The Terrace Rooms, as the name indicates, all have glass sliding doors that open onto the terrace overlooking the hotel’s courtyard, which is a gorgeous space flanked by a hanging garden of jasmine and passionflower. The rambling plants create a kind of curtain between the terrace and the outside and, for a moment, you forget that you’re in the middle of London and instead imagine yourself in some jungle retreat, far from the urban madness. That is, until you peek down over the railing into the courtyard, which I can imagine being filled with a sexy crowd sipping cocktails in the summer months.

One thing to keep in mind, however, is that whilst each room has its own terrace furniture, it is a communal terrace, so think twice before throwing open the drapes or sauntering out to enjoy a morning cup of coffee in nothing more than your sleepwear! 😉

As luck would have it, a dear friend of The Caviar Spoon ReBelle also stayed at The Mandrake, and as someone with (much) deeper pockets, he booked The Mandrake Suite. This space was vastly different from the room I was in, which had the rich green tones but was still kept fresh by a generous use of whites and creams. The Suite is opulent and gothic, clad in deep, dark colours, creating a seductive vibe.

The bed is done in the style of a Bedouin tent, with swaths of heavy fabric cocooning you into a sultry slumber, and the bed frame itself upholstered in a burnout velvet. The open bathroom (painted black, naturally) holds a freestanding tub on a floor of black Indian marble and the copper finishings shine brightly against the dark background.

It’s a suite that is excessive and indulgent and makes for one hell of a sultry stay.

And if you really want to splash out? Then let’s talk about the Penthouse. If The Mandrake Suite is a sinfully dark and mysterious den, then Penthouse is a heavenly “in the clouds” retreat with an edgy twist. Located on the top floor, the apartment is flooded with natural light, adding an extra level of luminescence to its already snow white interior. White marbles, white linens, white furniture, even a decorative “tree” in the bathroom with plumes of fluffy white ostrich feathers mimicking palm leaves. But to keep it from feeling too pure, there are pieces such as a chair covered with fur pelts, with slightly menacing horns sprouting from the top, and a black gothic-looking chandelier in the living room.

This, I have to say, is the absolute beauty of The Mandrake. The different details around every corner and the ability to constantly surprise you. Just when you think you know what to expect, they’ve turned things upside down and added a thrilling twist.

Since I was only here for a short 24 hours, I didn’t have the chance to properly experience and enjoy the restaurant, Serge et le Phoque. It is the first overseas venture from the Michelin-starred Hong Kong restaurant by the same name and is also operated separately.

Compared to the rest of the hotel, the interior here is much more conservative and modern, reflective of the refined modern French cuisine. It’s a sophisticated dining area and lovely in its own right but I have to be honest – I missed the mystical seductiveness of The Mandrake. I would have loved to have seen an edgier piece of artwork or a killer sculpture in the middle of the restaurant, like a showpiece.

Imagine being in the magical world of Narnia, then turning a corner and suddenly finding yourself somewhere very grownup and sensible. It just broke the spell for me, which is something I didn’t want to happen!

There are a few options at The Mandrake should you be in the mood for a late afternoon cocktail or a nightcap.

Waeska is probably the standout with its long bar and a mythical gazellecock (part impala, part peacock, and specially commissioned by Enrique Gomez de Molina) taking the stage as it grandly hangs leaping above everyone. The shelves also hold curios for you to peer at and ponder over as you sip a cocktail, surrounded by creatives, artists, and trendsetters and those who simply want to soak up the eclectic energy.

Jurema is located outside on the first floor of the terrace in the courtyard. It’s more relaxed (think cabana vibes) and a fab hideaway for secret summer cocktails surrounded by those gorgeous jasmine and passionflower plants. This is reserved for guests only so don’t miss out on the chance to have a peek into this laidback hangout should you have a room at The Mandrake.

Finally, there is Serge Bar. This is part of the restaurant and focuses mostly on wines and champagnes – it’s a gastronomy bar meant to be enjoyed in conjunction with the food, with aperitifs created through the consult of the Head Chef to ensure a synergy between the two. 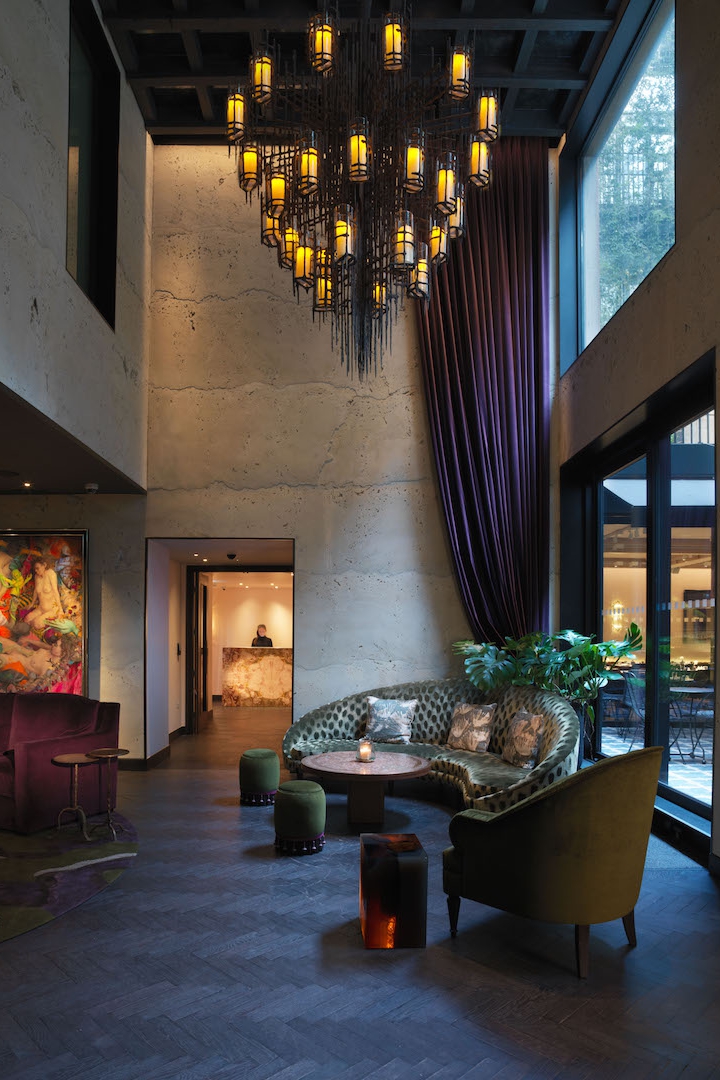 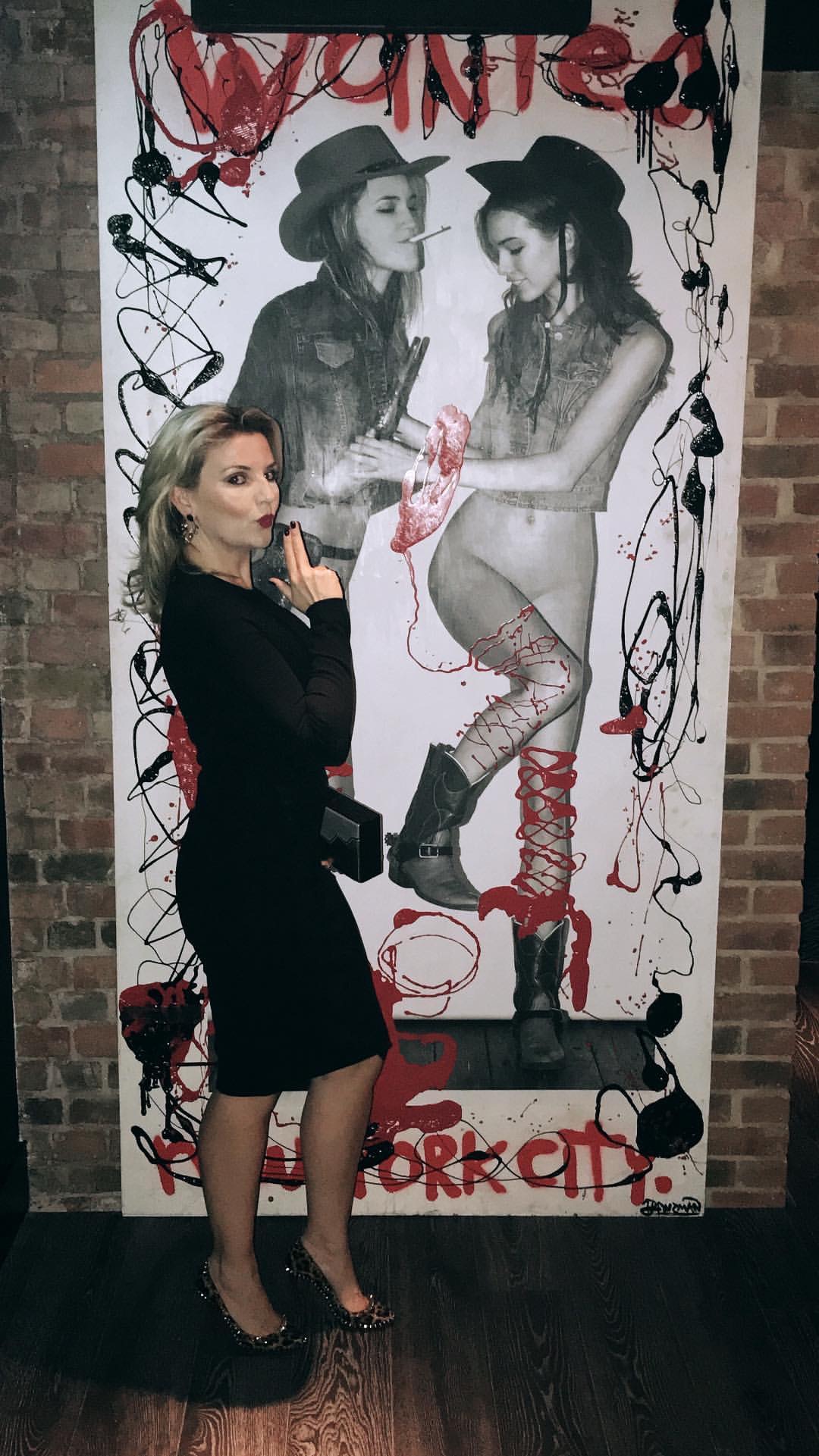 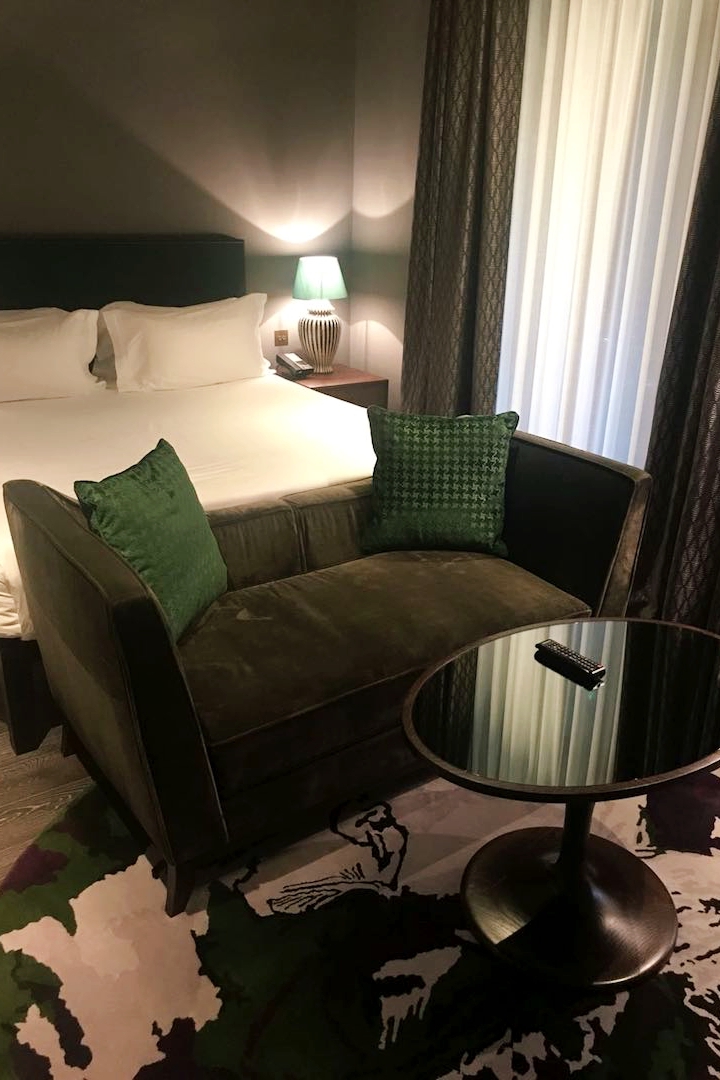 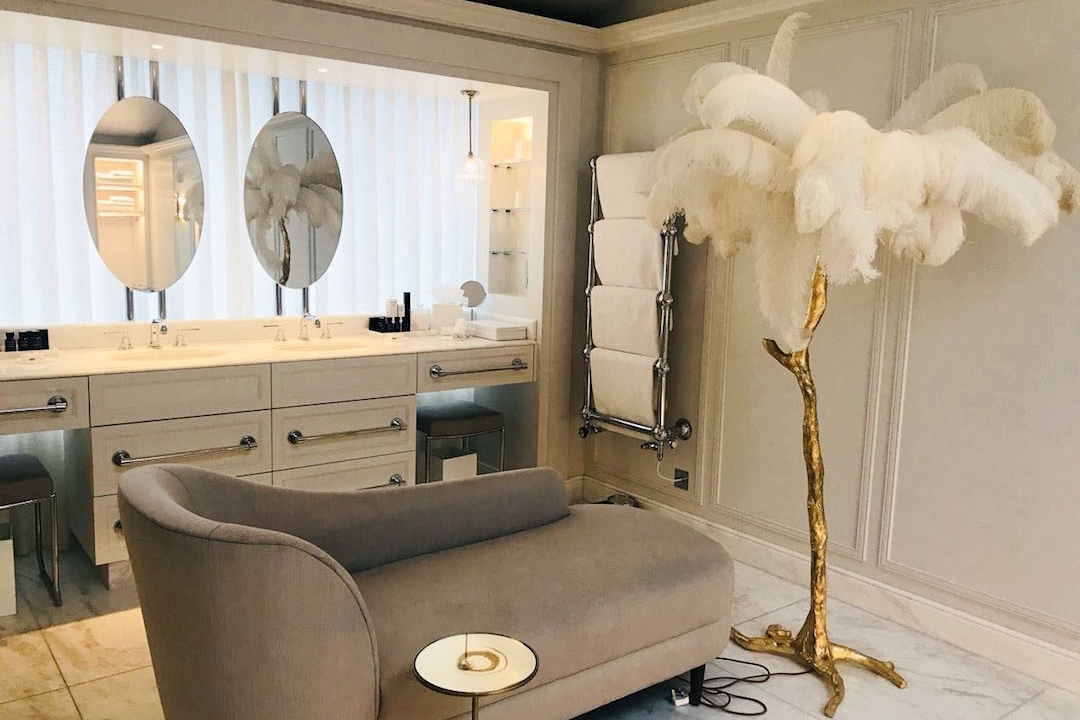 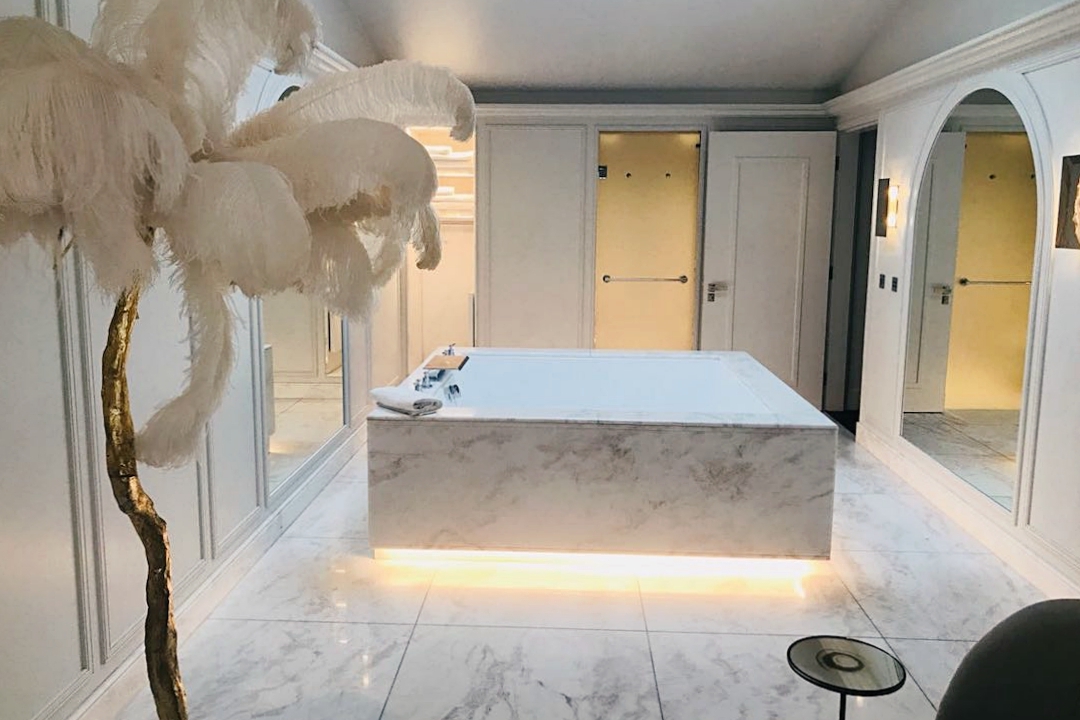 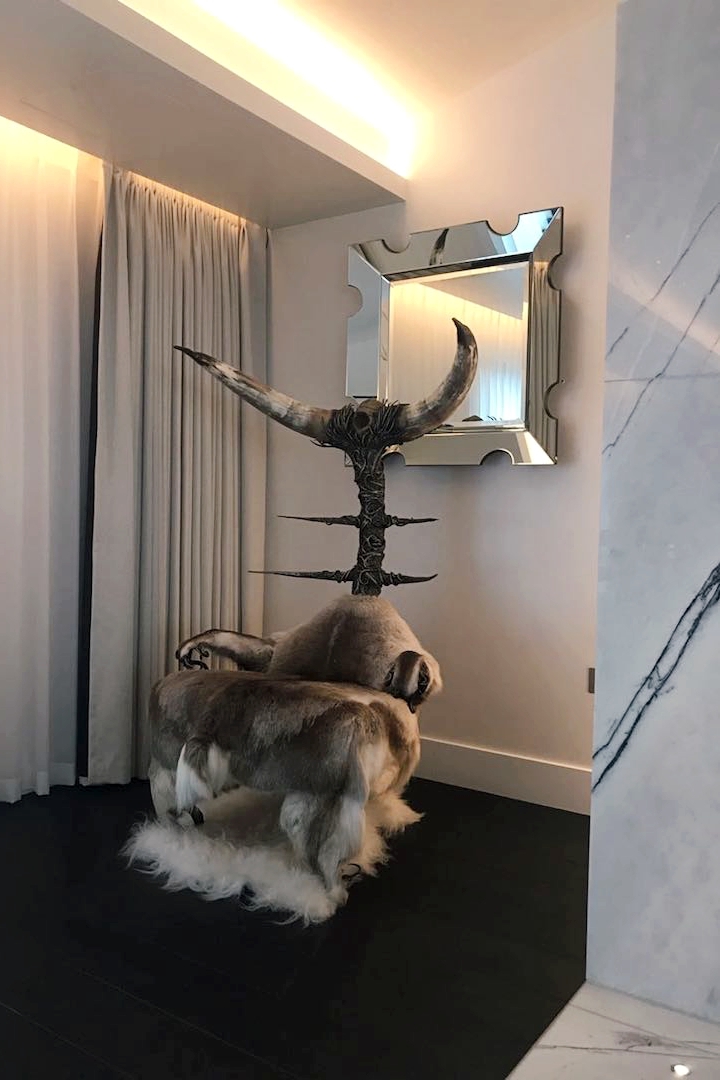 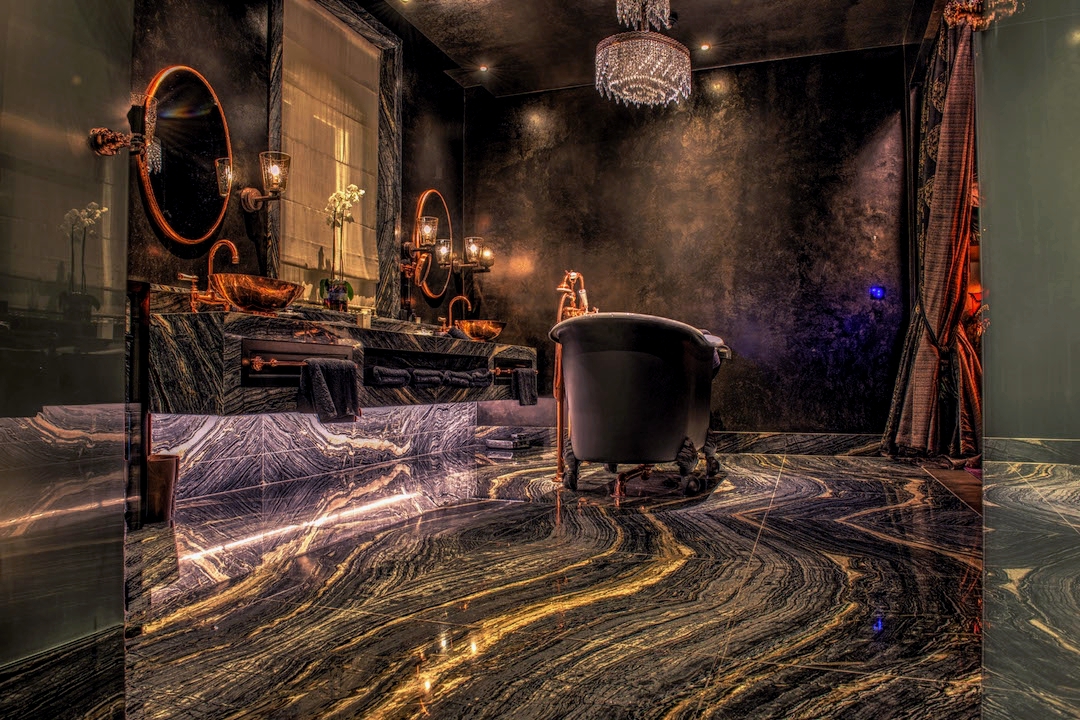 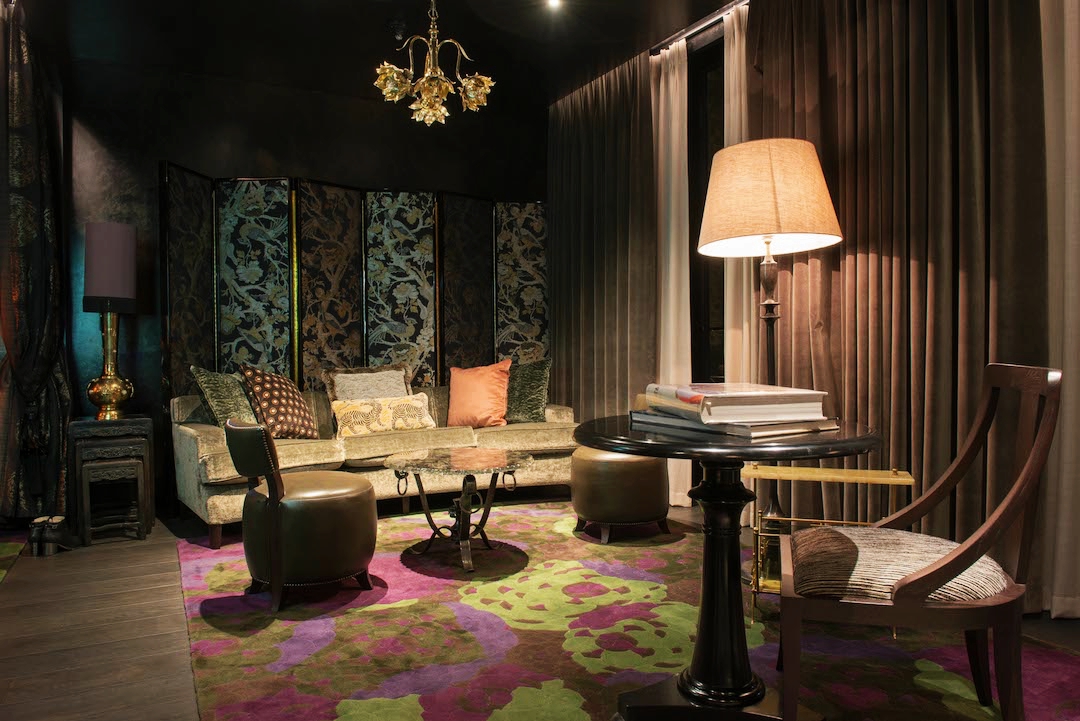 Here’s another feature of the hotel that I didn’t have the opportunity to indulge in during my short stay.

I’m thoroughly disappointed that I couldn’t find the time to go to the spa but it is absolutely on my “must do” list the next time I’m here.

The Mandrake doesn’t have just any ordinary spa. All of their offerings are centered around spiritual wellbeing with experiences ranging from Full Moon Gong Baths to Reiki to the Sonic Enchantment, which is a live musical and multimedia experience offered once a week in group sessions. If you’re open to new experiences that go beyond what we’ve come to know as “spa treatments”, then indulging in one of the Mandrake’s mystical offerings is a non-compromise.

This is the kind of place where you would call up Prangsta for some delectable costumes and host the most secretive and seductive party for the world’s greatest creatives – artists, entertainers, photographers, musicians, and just the curious. We’d put this at the top of our list for holding our first Caviar Société Supper Club where our rules are no names, no mobiles, and no photography.

Now, as for you, Mandrake Hotel, you mystical creature…you somehow manage to bring out the naughtiness and curious nature in even the most demure of characters. Pop us onto your VIP guest list next time you have a party, won’t you? We think there’s some delicious fun to be had!

Disclaimer: The Caviar Spoon was hosted by The Mandrake but all opinions expressed are our own.