Our love affair with Stockholm began quickly and snowballed into multiple trips within a short period of time. One of the moments that started it all is TAK, a slick Nordic-Japanese restaurant where we had the most delightful dinner.

Situated right in downtown Stockholm, TAK is located within a new development called Urban Escape, an urban regeneration project to renew the vibrancy and vitality of the city centre.

TAK blipped onto our radar as we were conducting extensive research on the best restaurants to explore during our visit. When we found out that the Culinary Director was Frida Ronge, an acclaimed chef named Rising Star of the Year in 2013, we were instantly hooked. With the food industry still being dominated by men, it’s always refreshing and exciting when we “discover” women who are paving the way and creating waves in the field. Not to mention that the CEO is also a woman – Maria Rogell, a hospitality veteran with over 25 years in the restaurant industry.

And then what sealed the deal was Olivia Secher, TAK’s PR & Marketing Manager at the time, who was warm, welcoming and utterly gracious in accommodating us. In fact, we’ve since adopted her into our #caviarrebelle clan!

When you arrive, it looks like an office block and for a second, you might find yourself a bit disappointed in how little fanfare there is leading up to this buzzed-about restaurant. With the hipster enclave of Sodermalm and quaint Gamla Stan just 5 minutes away in either direction, there’s a chance you’ll question your decision to dine in the downtown area. But Pra knew that TAK had received rave reviews and there was probably more than meets the eye.

I found myself in the lift with a well-heeled crew and my spirits started to lift. Arriving at the top floor, there were still zero hints about what I was going to encounter. But the minute I walked through that door…hello, TAK!

Every single assumption and feeling of wariness I had up until that moment vanished. It was 7PM and the place was packed – I couldn’t spot a single open table. Contrary to the rather plain appearance from the outside, inside TAK was hip and happening, filled with buzzing laughter and an unmistakeable air of class. The crowd here is mostly 30-somethings and upwards and from what I could see, there were groups of friends, as well as families. In fact, Chef Frida’s family were there that night – how proud they must be!

You can tell that this is the place to be just from the vibe, but it’s nowhere near pretentious or exclusive. In true Scandic modesty, TAK doesn’t loudly announce its presence or boast about the sophisticated clientele it draws. People just know and gravitate there, which just makes it so much more Caviar!

The entire design of the place reminded me a bit of a contemporary Hakkasan. Gert Wingårdh, an award-winning Swedish architect, is responsible for the beautiful design and furnishings at TAK. The light woods and clean lines blend together the minimalistic approach found in both Swedish and Japanese design. It’s a pared-down modern space without being sterile and the style of the table seating allows for a feeling of intimacy and togetherness without the bulkiness of booths.

When I arrived and saw that I was the lone diner, unlike everyone else who was part of a group, I started to feel apprehensive, like it was odd to be there on my own. But before I could dwell on this, I was whisked off to the open kitchen where I very happily plonked down at the counter, which has around eight seats. This is one of the perks of dining solo! While you may not have a dining companion, you’re much more likely to get seats like this, which can be just as good as a chef’s table sometimes!

I left my menu in the good hands of the people at TAK and didn’t regret it for one minute. Every single bite passed my lips without hesitation.

My meal opened with a glass of sparkling sake and tsukemono (Japanese-style pickled vegetables) and was followed by a starter of Scallop and Chanterelle, topped with some crispy kale.

The main course was King Oyster Mushroom and Zucchini, served with cream of grilled zucchini and Roman lettuce, hay smoked potatoes, browned soy sauce butter, and shichimi togarashi (a seven-spice blend). This is a perfect example of a vegetarian dish done right! It was packed with flavour and well-balanced, and it goes to show that vegetarian food doesn’t have to be boring or an afterthought.

And of course, I can’t forget dessert! Initially, I wondered how soy sauce and crème brulée would pair together but of course the salty sweet combo was spot on. Trust me when I say that I cleaned the bowl.

The portions were just right, ensuring that I didn’t struggle to finish my plates or end up feeling like I had been overly indulgent in calories (the cocktails took care of that for me!). What a fab experience to see the kitchen staff working together like a well-oiled machine and then being able to taste what I had just seen being made! I spent all evening merrily eating and drinking whilst taking in the sights and sounds. 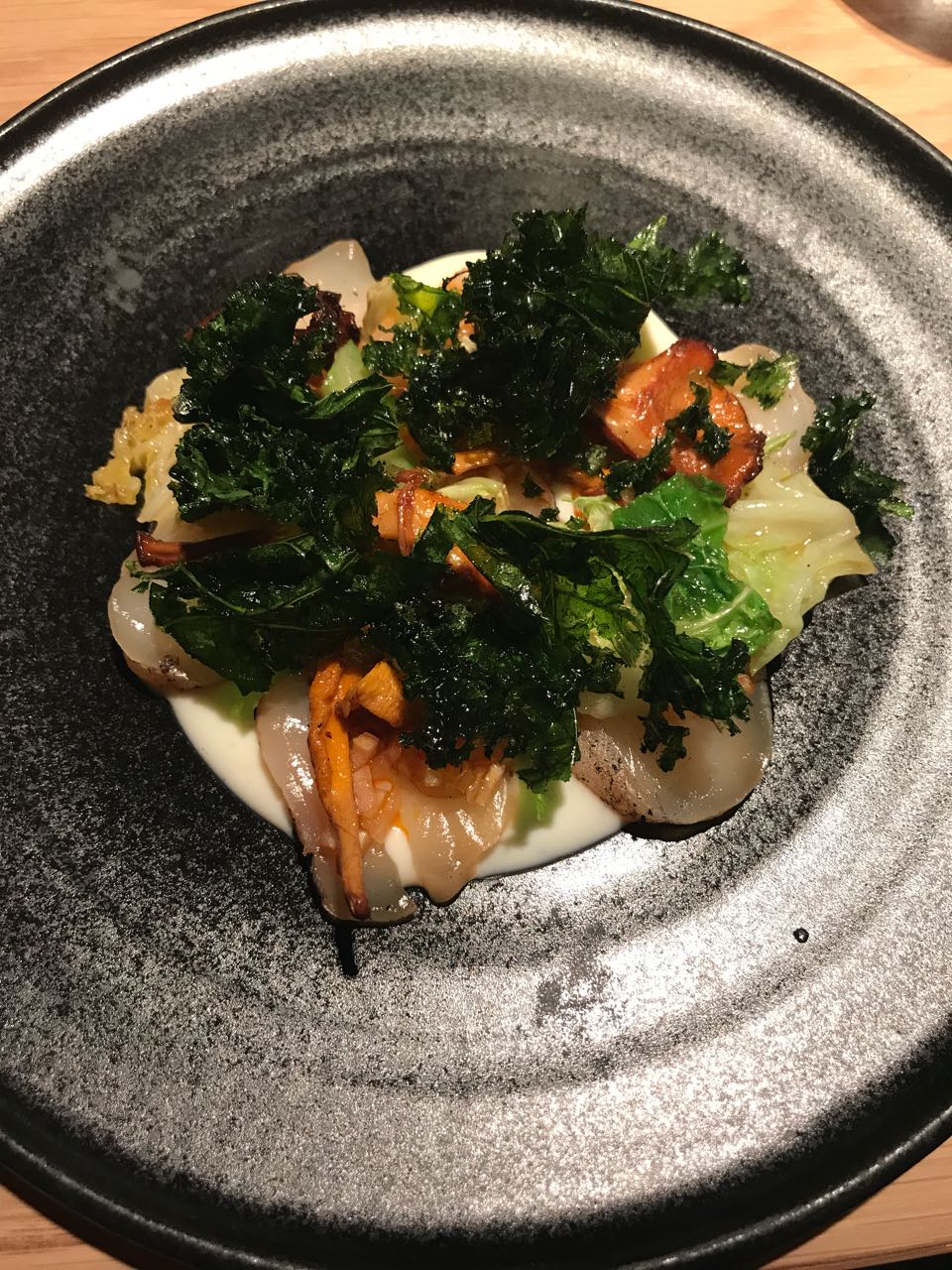 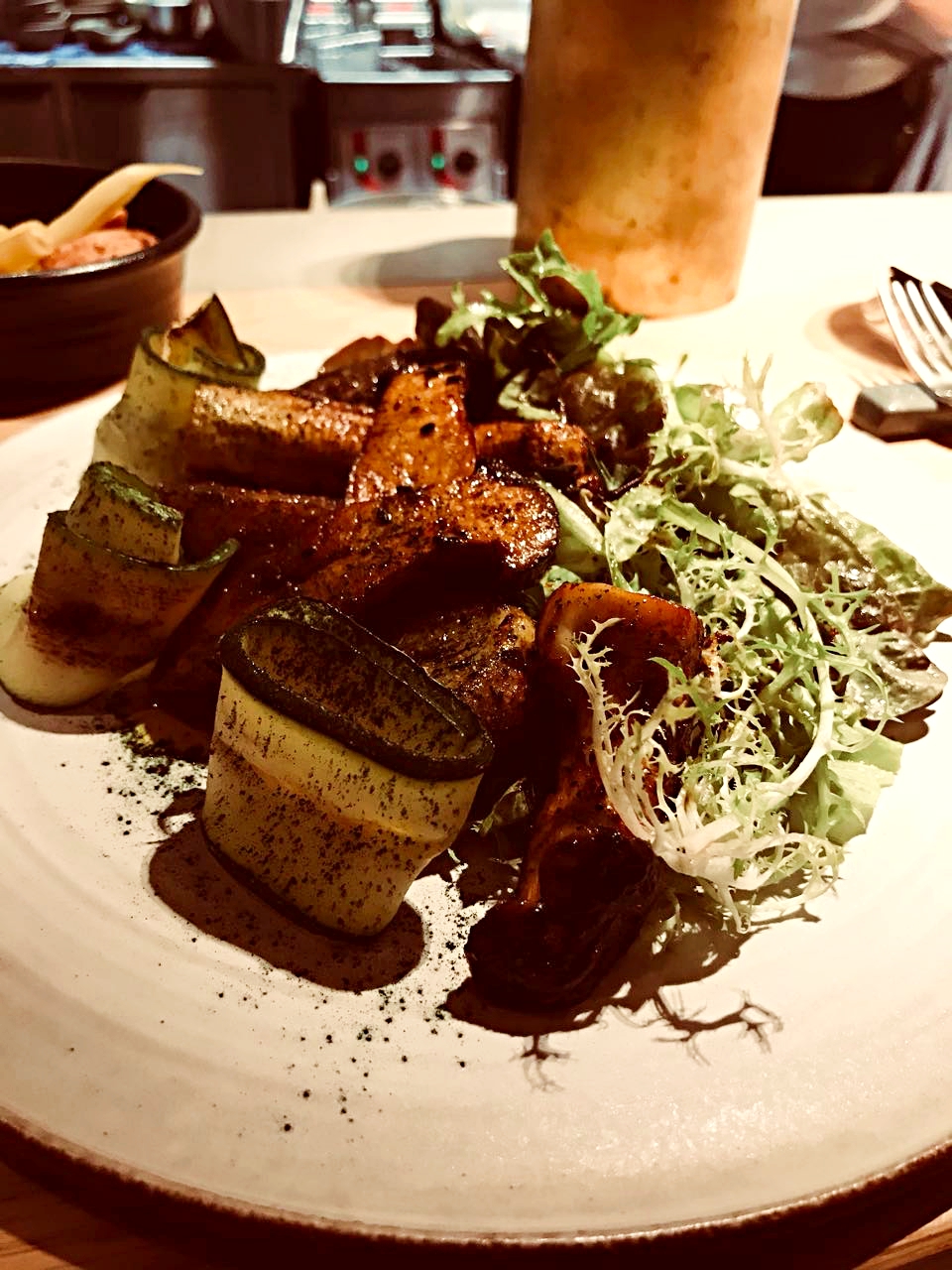 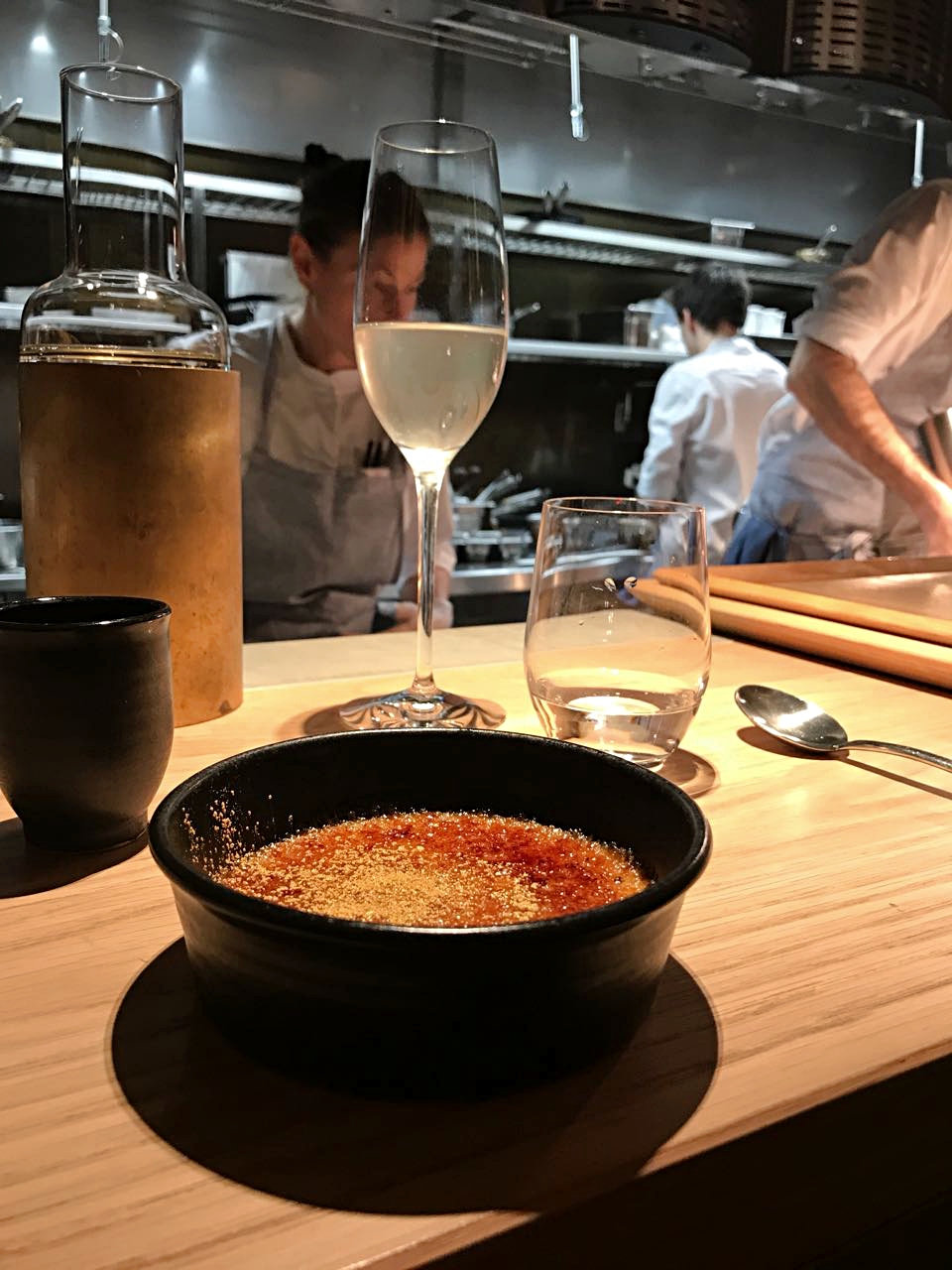 Hands down, the cocktails here were incredible. Charlotte Halzius is the creative mixologist behind the bar and let me just say, she was crowned champion bartender of the 2017 Diplomático World Tournament for good reason!

Be sure not to miss out on trying at least one of their specialty cocktails, like Charlies Champagne Cocktail, which consists of Choya umeshu extra, sugar, bitters, champagne, or Blood, Tears & Gold (aka the one that won Charlotte first place), made with Diplomatico Mantuano rum, Amer Picon, cherry syrup, and gold tincture.

TAK also has a lovely sake selection, as well as organic and biodynamic wines. They also work with a Kiuchi Brewery in Japan to make their own beer AND they worked with Kobe-Shu-Shin-Kan (another brewery, this one specialising in sake) to make TAK’s exclusive sake.

Speaking of which, the restaurant also has its own sake sommelier! Fixi Lindén is one of the best in Sweden and if you book a sake tasting, she’ll lead you through the different types of the popular rice wine.

If you haven’t caught onto the theme yet, by the way, TAK is strong with women leading the way. When the CEO, the culinary director, the head mixologist, and the sake sommelier are all women, it makes us girls at The Caviar Spoon stand up and cheer!

Don’t hesitate to dine solo (even if it feels like it’s not a common occurrence) and book a seat at the counter. It was such a special experience to get such a close firsthand look and I would do it again in a heartbeat! Plus, those cocktails…!

Disclaimer: The Caviar Spoon was hosted by TAK but all opinions expressed are our own.