When we heard that that Marea, one of the Big Apple’s best hotspots for high-end Italian, had opened in Dubai we became filled with excitement and anticipation, not to mention a slight sense of anxiety.   Having found their new home in what many consider the most fickle part of Dubai, The Gates in DIFC, the question became whether or not these guys would be able to win the hearts and stomachs of the lunch crowd and after work crew, many of whom remain fiercely loyal to the long standing La Petite Maison and Zuma.

The original Marea in New York City has enjoyed a decade of great success, boasting not one but two Michelin stars.  Their superb presence in the city earned them past accolades such as the 2010 James Beard Foundation award for Best New Restaurant in America, so it seemed the perfect opportunity for us to do our monthly #nightwithmalouf supper with Middle Eastern culinary legend and the 2019 James Beard Foundation winner for Best Dessert Book, SUQAR: Desserts & Sweets from the Modern Middle East.

With Marea meaning “tide” in Italian, it was up to us to find out if Marea would be a case of high tides and good vibes.

The Brand and Interior Design

Under the eagle eyes of Interior Designer Viktor Udzenija the Altamarea Group’s new operation has taken interior elements from New York and peppered them across Marea’s desert-dwelling sister to create a unique style.  Tucked away in the Gates, we were greeted to an appealing design – it wasn’t overly extravagant or lavish as many Dubai haunts tend to be, but it also wasn’t the kind of minimlist design that leaves you feeling uncomfortable and sterile.

As far as the visuals go, the bar area was unthreatening but had a glamourous appearance that was in line with what I had heard about it previously.  The bar itself had a straight forward design with a warm vibe and a fine selection of award-worthy Negroni’s and Margharitas.  Other cocktails are like pieces of art, served with panache – it’s not pour, splash, and stir here.  Aim for the elegant Summer Fling or try out the more daring Forbidden Games

What was a big tick was seeing the friendly face of Milan’s very own Steve, ex-Manager of the once buzzing Ruth’s Chris Steakhouse in Dubai Marina and now one of the two second-in-commands to New Yorker General Manager Sean Smith.  Sean is one of two who are permanent Dubai employees originating from the US mothership.  “Sean and Mehmet are the other managers and they are great. They bring the local experience that I lack along with a passion to make the restaurant successful,” Steve said.

Upstairs was “cozy”, in Dubai terms.  I’m still trying to get my head around this concept of “the bigger the better” when it comes to the restaurant world in the Middle East, but I can safely say that in both Chef Malouf’s and my humble opinion, the first floor’s capacity of 90 seated guests with a downstairs lounge of 65 is spot on (the outdoor seating is perfect for when the heat cools down).  The night we were there was smack-bang in the middle of the Eid break however, but there was still a healthy flow of guests throughout.  I can see how a venue of this size will, with the right marketing, stay fresh, relevant and never feel sparse.

We were of the opinion that the décor needed a slight brightening in terms of color palette, although it was welcoming due to there not being any external views.  Surely there is an opportunity for some emerging artists to display their work on the walls of Marea!

With this size, the options can be endless.  Sean has mentioned pasta-making classes, jazz nights, plus the layout makes it a great option for the ever-growing business lunch crowd with a wallet friendly 125AED price.

Our hands were raised at the non-smoking first floor, however the thumbs went down as the stench of old smoke permeated the downstairs lounge.  One could argue “that’s Dubai for you”, but someone needs to start the trend so that’s no longer the case, right?

The Audience, Vibe, and Music

During our visit we noticed we were actually the only expats in the vicinity, but as I said, it was Eid.  We all know what us folk usually do when we have the opportunity for a killer break by turning a couple days into a week’s holiday if strategically booked in advance😊

The Exec Chef and Staff

One big tick to Marea is to do as they say.  There are way too many instances in Dubai of a restaurant buying the IP of a chef, but then never actually seeing the man or woman in question.  This wasn’t and isn’t the case here.  One month prior to opening, Chef Michael White was over in Dubai working tirelessly with the Dubai team.  He mentored the Dubai’s head chef, Yunus Emre Aydin, who has worked in the region for 4 years. Prior to this he had opened their property in Istanbul, Ristorante Morini, giving him the added advantage of “knowing how it works around here”.

On top of Chef White, there’s the footprint of another highly regarded colleague: Chef Lauren De Steno, initially trained under the wings of Eleven’s Chef Daniel Humm before finding herself with Marea.

“We flew over the executive leadership for the weeks leading up to the opening.  Recipes were derived from our 10 years of favorites from New York,” Sean explained.

When poking around regarding engagement of staff and recruitment, (you can take the girl away from recruitment but can’t take recruitment away from the girl!) Sean explained “Staff have come from all over the world.  We have spent a lot of time with training and with bringing our companies values and systems into place.  The response from the staff has been fantastic and we have an incredible team.”

One could argue that everyone could say that but from the eyes of a seasoned recruiter and employer brand consultant, blended with our very own Chef Malouf, it was apparent that staff were trained vigorously and tackled my companion’s questions in style and finesse!

And the proof is in the pudding.  Sean clearly talks the talk and walks the walk, having opened Marea New York nearly ten years ago.

“Going forward Chef White will be coing to Dubai at least quartely, and most likely more frequently to spend a few weeks at Marea to insure that his vision is fulfilled.  In addition, that’s also why Sous Chef Jason and I moved here from the US,” Sean explained. 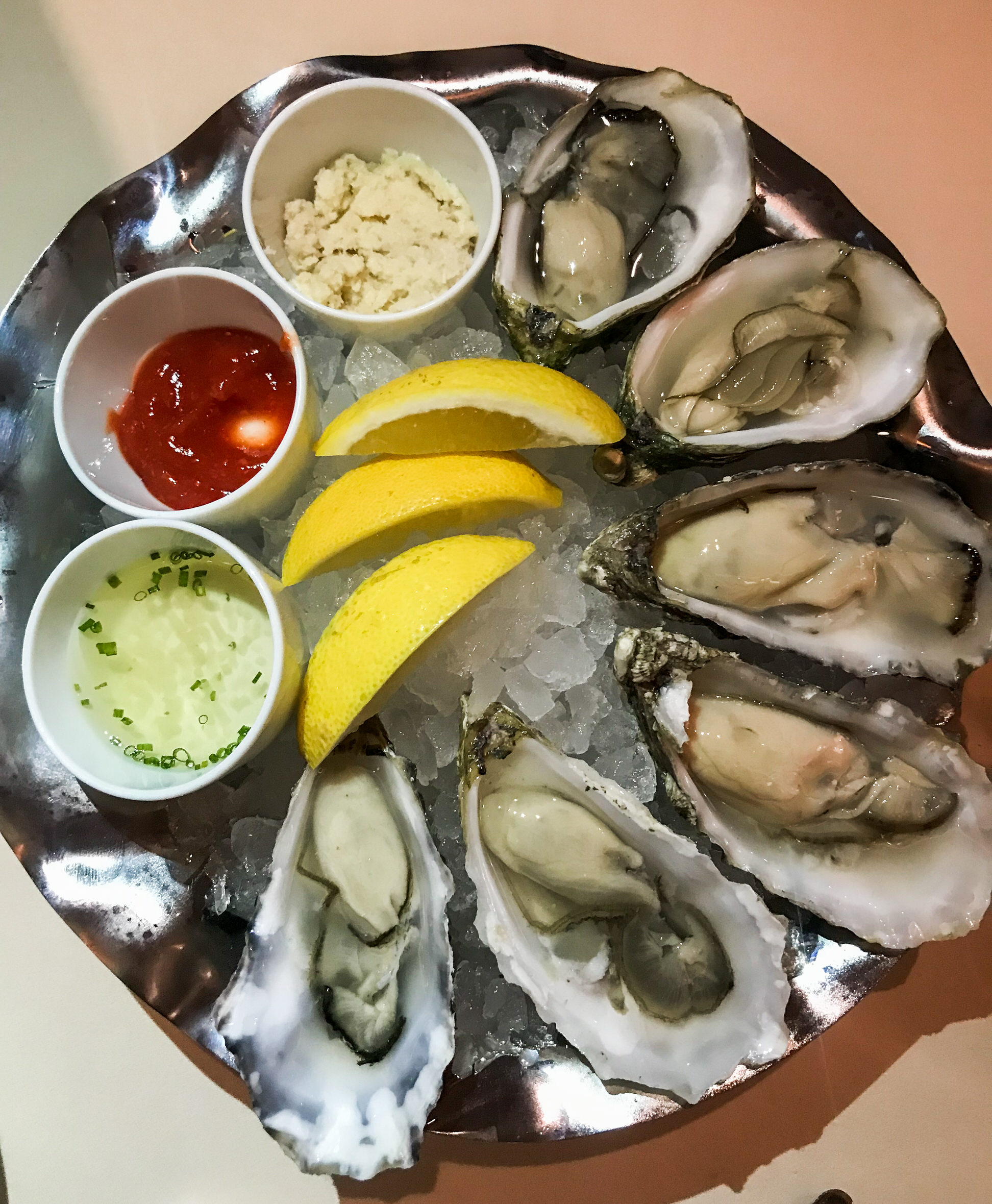 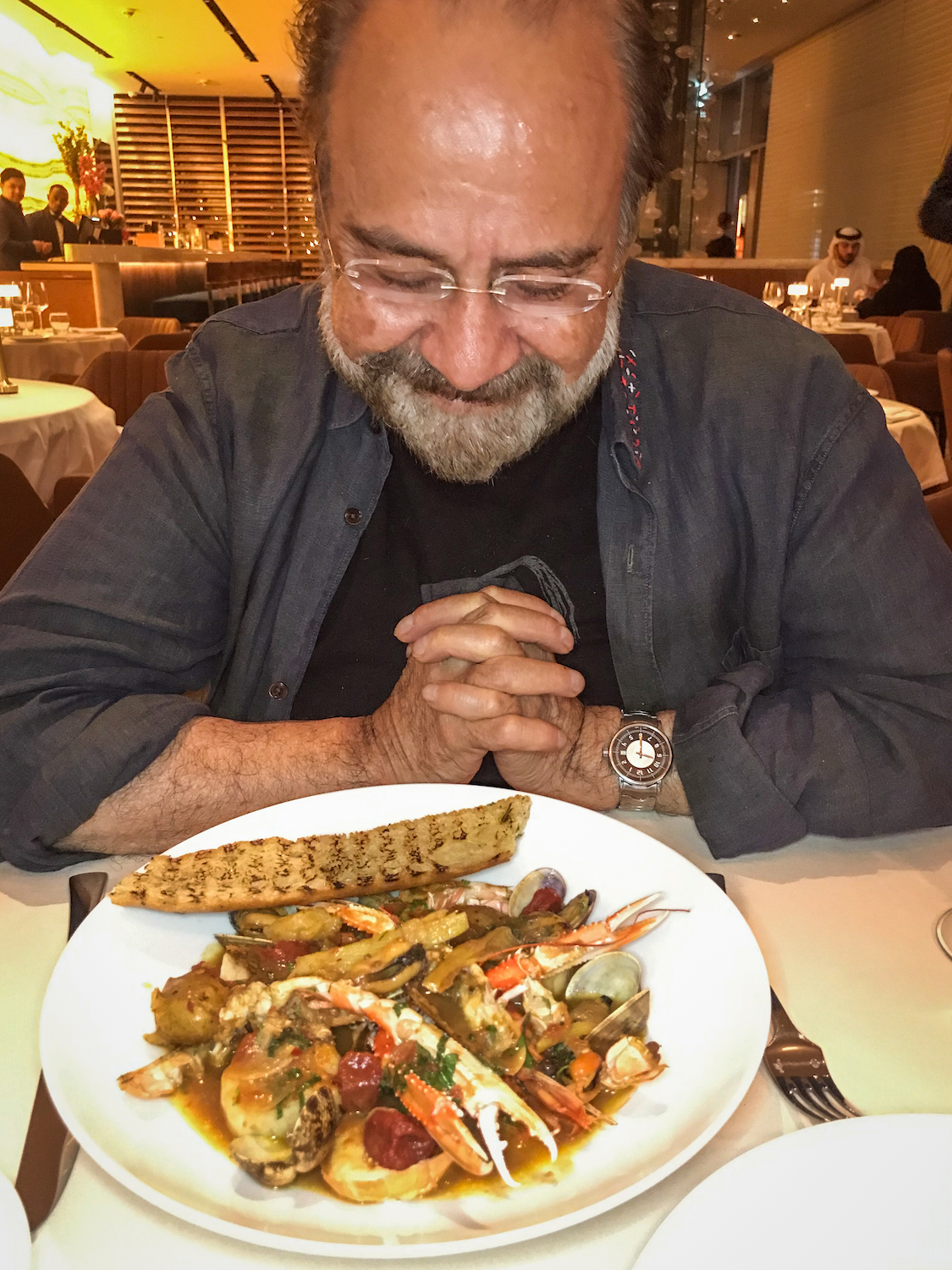 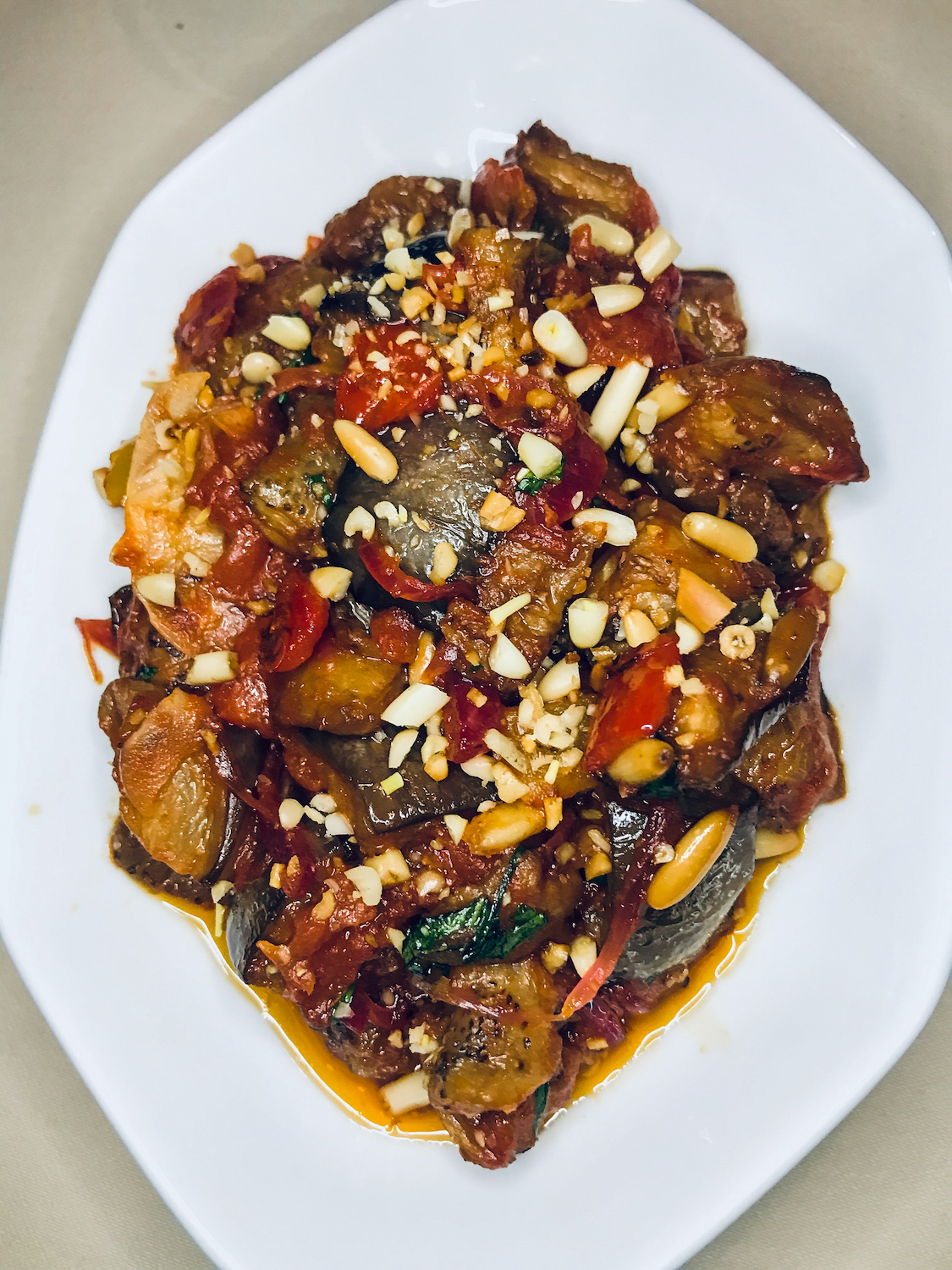 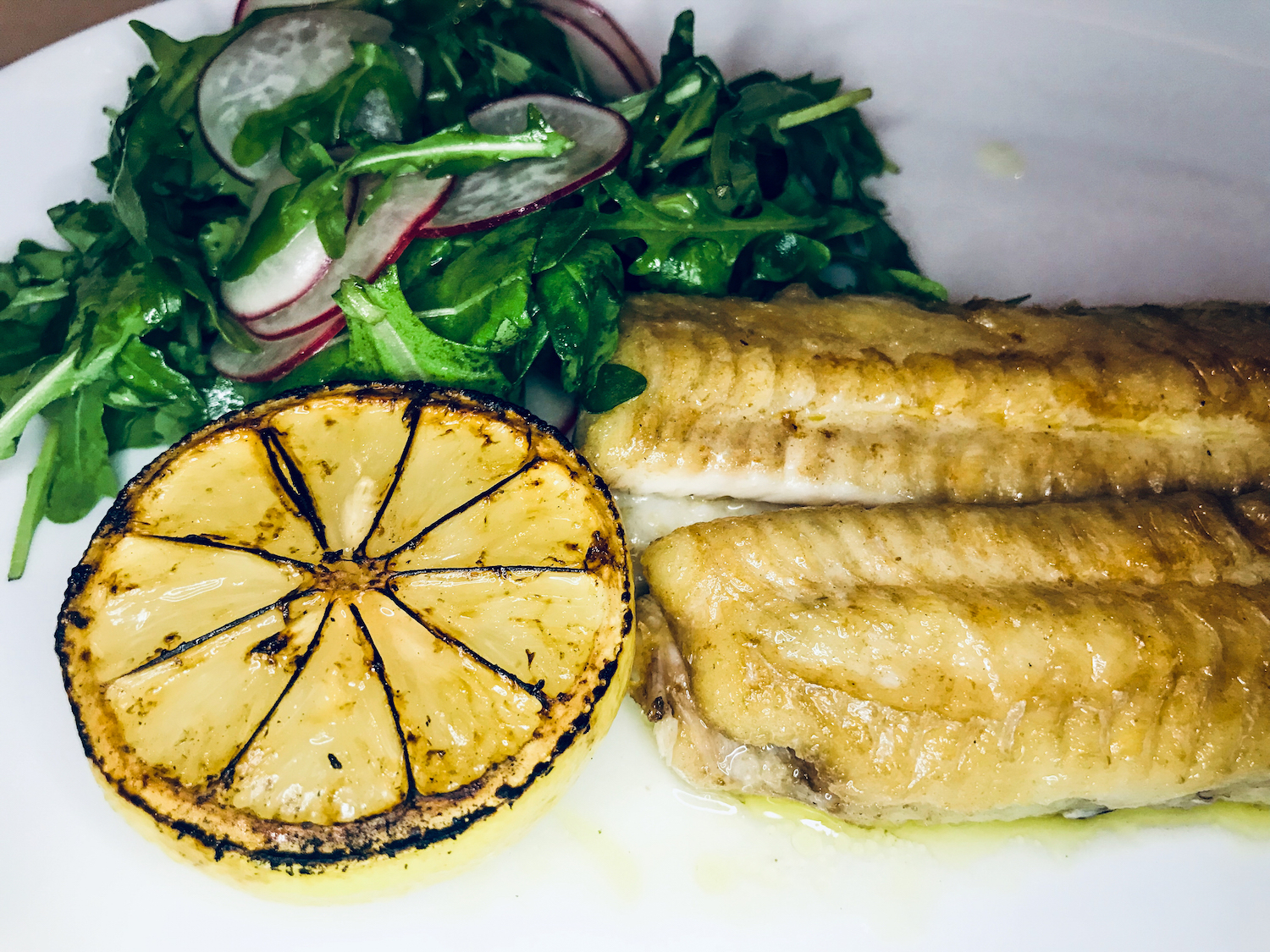 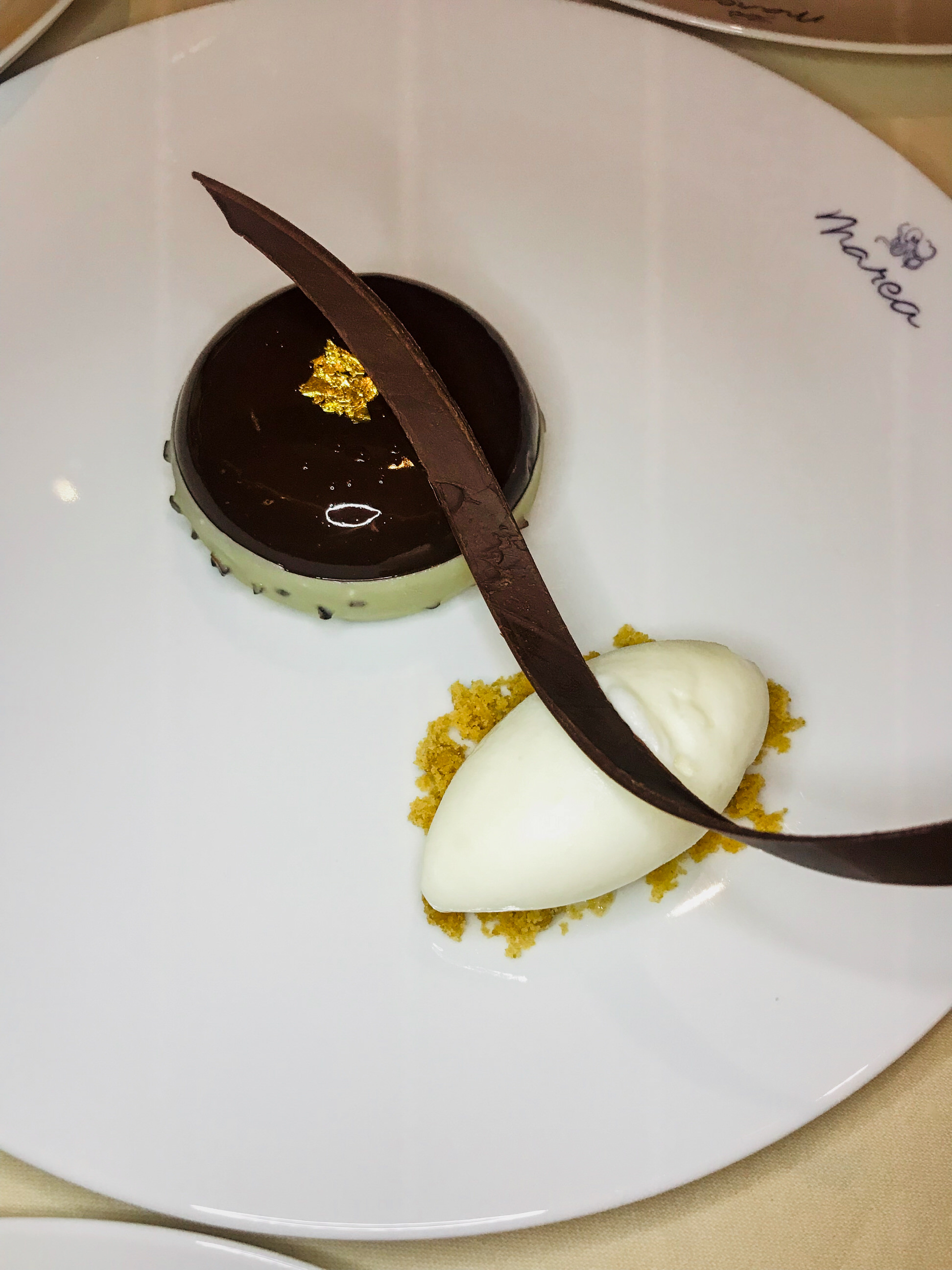 A fabulous food menu with a slim, yet growing wine list.

We opted for a platter of selected oysters which were far from disappointing, the pasta was absolutely superb and home cooked to a T.  A non-compromise dish is the Astice Antipasti – lobster, burrato, pickled eggplant and basil, followed by pan sautéed dover sole.  We finished up by utterly overindulging with the Marea “Forgot Your Hips” desserts.  The panna cotta had a Malouf tick!

One bug bare for any quality chef is the availability of fresh food in the Middle East, but we were super impressed.  “Produce is sourced from multiple outlets throughout Dubai and we purchase line caught and sustainable seafood whenever it is an option,” Sean said.

On top of this, big ticks for the brand’s sustainability initiatives.  Sean told us about their mission, saying “We purchase sustainable seafood when possible, reduce plastic wherever possible (our straws are made out of corn starch for example).”

Let’s see more of this!

If you can take a grilling from Chef Malouf without flinching, then respect.  Throughout our evening the staff were genuinely impeccable with an encyclopedic knowledge of each and every dish.  It was super refreshing to see.

Was it value for money?  Well, is anywhere in the Gates value for money?  You will feel a pinch in the wallet BUT did we walk away moaning about poor quality, high cost? Hell no! And of course there are the well priced business lunches.  Perhaps Marea could be the after work haunt for Bubbles and Oysters perhaps? .. hint hint..

In the words of the Chef Malouf on this occasion:

“Food was rich and intelligent. Seafood sparkling fresh! Wine list developing. A good measure of the list is the quality and price of a glass of pouring champagne which won me over and a big tick for cocktails espeically negronis”