Full disclosure: my expectations of Cinq Mondes Spa at the Emerald Palace Kempinski Dubai were high. And not just because it’s set in one of the city’s most lavish hotels – think 6400 chandeliers, the emirate’s first Alain Ducasse restaurant and a design aesthetic that’s just a breath away from full Versailles on Palm Jumeirah.

No, the real reason for my starry-eyed optimism comes down to its new director, Neil Hewerdine. He’s the wellness maestro behind spa legends like Burj Al Arab and  Atlantis The Palm and an award-winning expert in the art of indulgence. To be fair, Neil only joined Cinq Mondes a few weeks ago, so the full force of his genius hasn’t taken hold yet. That said, my confidence wasn’t entirely misplaced. Some elements could do with refining (more on that later) but overall the spa shapes up superbly, balances out minor flaws with very reasonable prices and manages to pull off an attractively minimalist space in complete contrast to the Emerald Palace’s decidedly neo-Baroque extravagance.

Cinq Mondes spa has plenty of potential and, with Neil at the helm, a good chance of becoming the sort of escapist fantasy we deserve.

The Emerald Palace Kempinski echoes 18th-century European royal palaces and if you’re in the mood to be dazzled, the Grand Foyer, complete with vast Swarovski Crystal chandelier, is more than happy to help.

By complete contrast, stepping into Cinq Mondes is like entering a cloister. You can almost touch the tranquillity. Soft lights and candles line the hallway, the colour palette’s cream on cream and the right side of lush and organic without a hint of austere. Admittedly it takes a second or two to adjust to this haven: it’s such a change from the hotel’s gilded glamour. But really, it’s simply another take on opulence: lux and equally irresistible. My advice? Just give in, slow right down and let yourself be seduced, 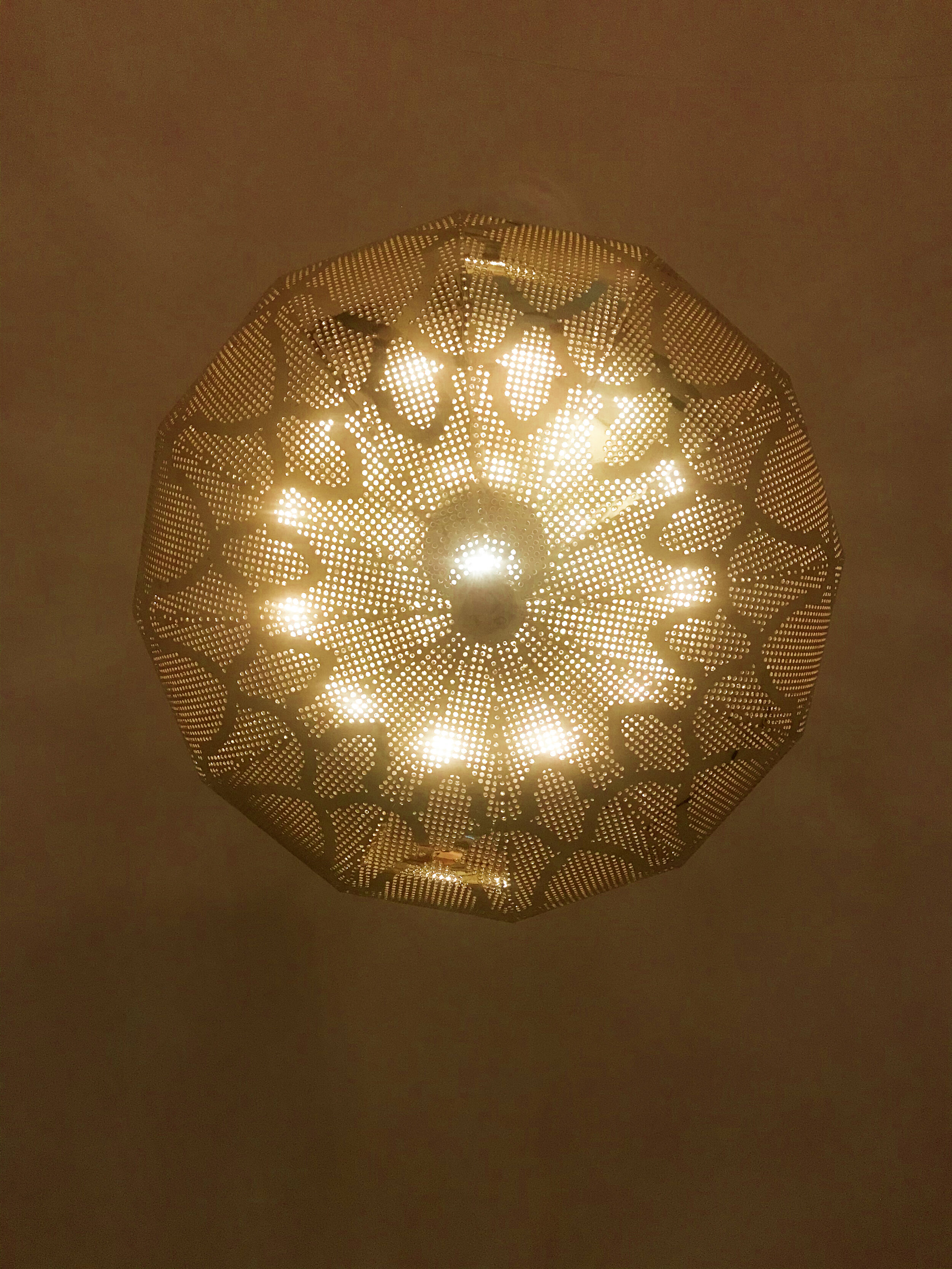 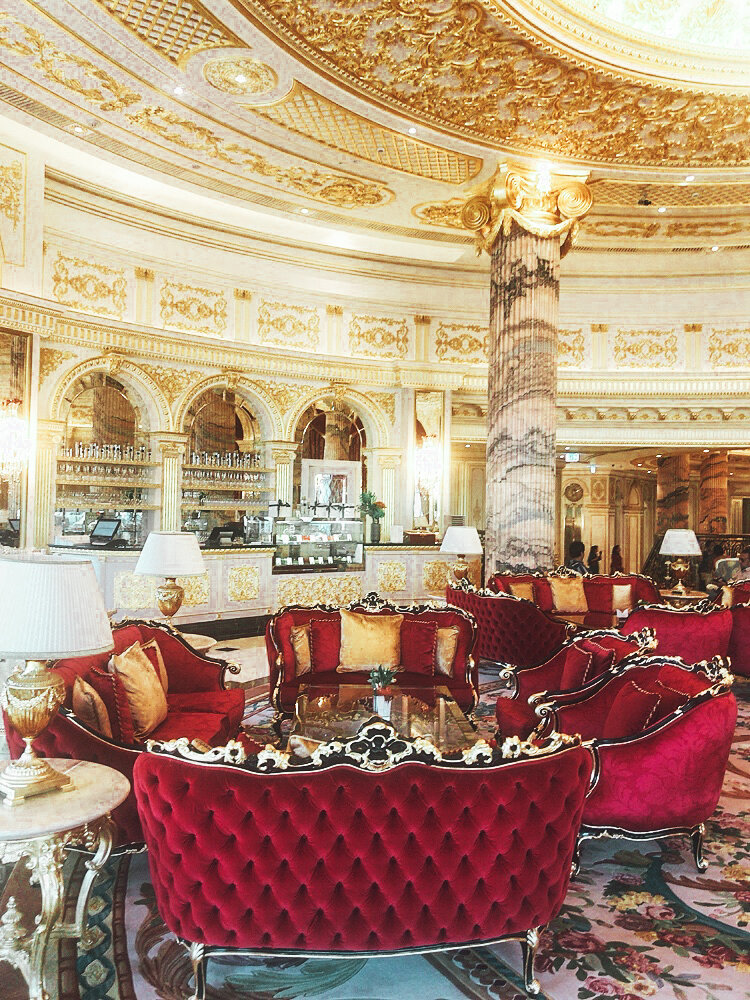 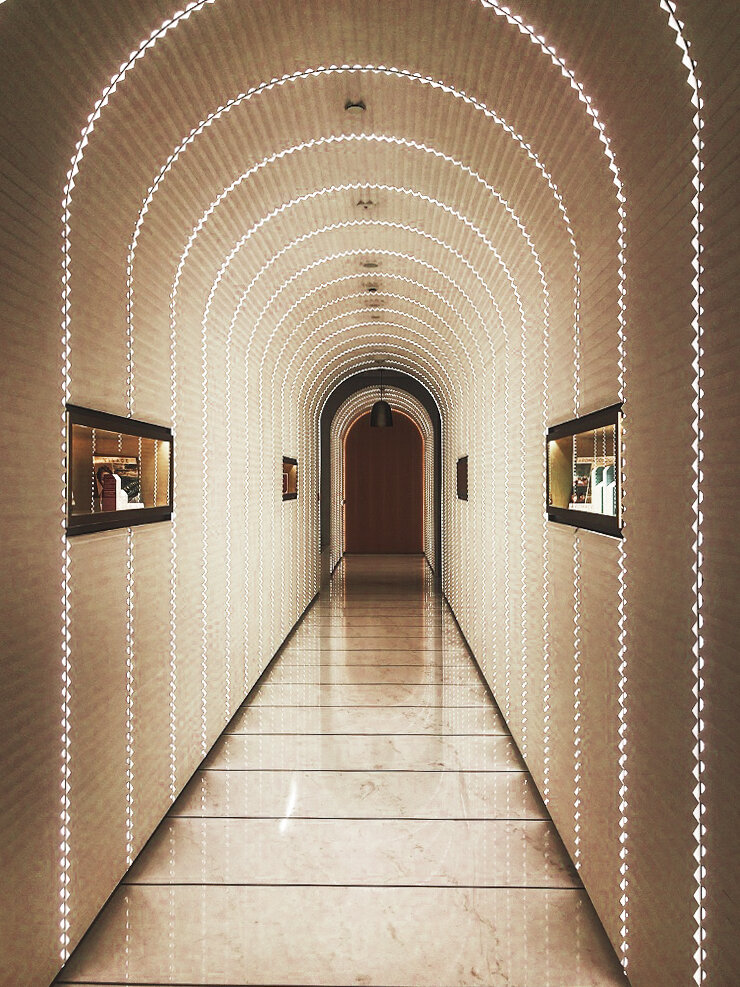 We opted for the two-hour spa experience in our own private VIP suite, which was actually more like a luxurious one-bedroom apartment, complete with sauna, personal hammam, massage room, chill space, enormous showers with Salvatore Ferragamo products and a kind of intriguing wooden bath.

One downside was the slightly jarring sound of suite’s natural ice maker, and perhaps they could think about tailoring slipper sizes to fit non-clown feet. Plus, when you’re in a luxury spa you do expect that the massage beds would be Gharieni  – Sammy Gharieni is the king of massage beds after all!  Still, I’m confident Neil will be dealing with details (probably as I write). And despite those relatively minor quibbles, the suite was candlelit and mood-perfect for our chosen treatments. 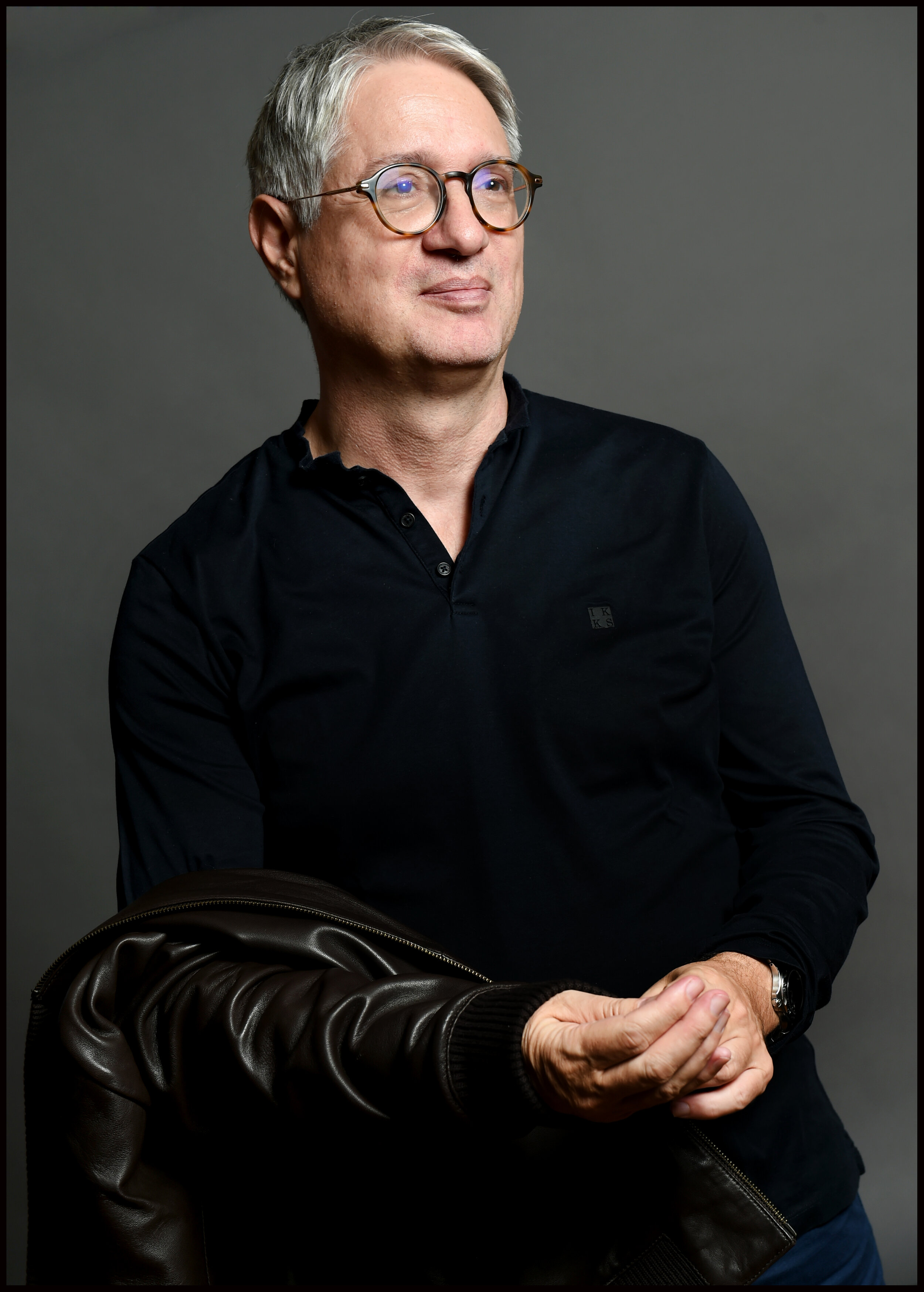 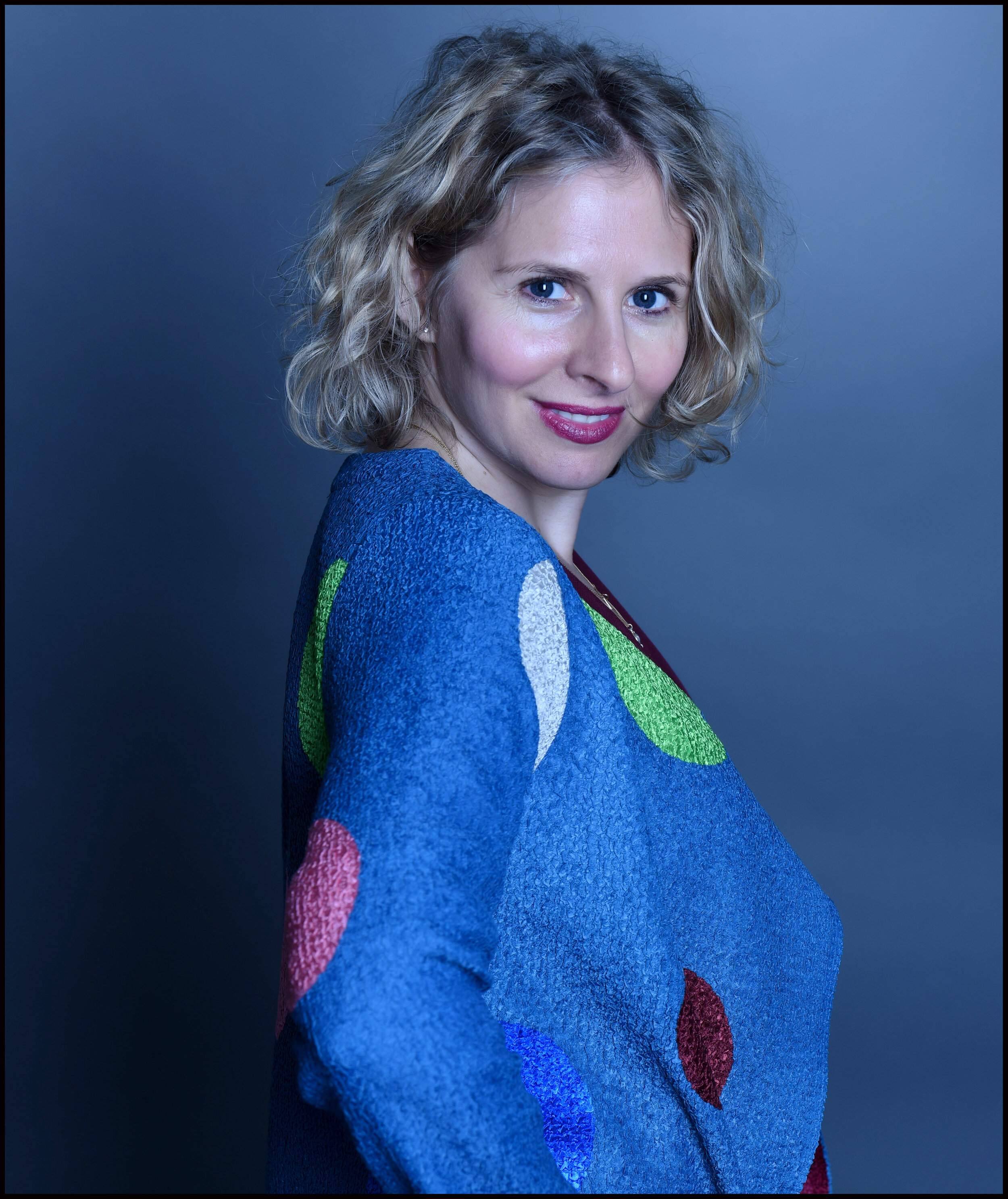 The Cinq Mondes brand was born in Paris in 2001, it’s the brainchild of Nathalie and Jean-Louis Poireaux and based on the traditional beauty rituals and customs they studied on their travels around Indonesia, Thailand, China, Japan, and Morocco. So far so fascinating, but what really piqued my interest in the brand was its promise of, ‘Happy skin, from the inside out’. Realistically, total transformation in a few hours is a big ask, but since Cinq Mondes spas are now a presence in some of the world’s most exclusive five-star resorts, I was secretly hoping for more than a little dermal delirium and at least a hint of cellular harmony. I have to admit to being a little let down by Cinq Mondes’ product packaging which was faintly dull and didn’t really line up with the brand’s lux reputation but on the other hand, this lines up beautifully for a matchmaking opportunity with a killer illustrator?

A world of soothing in a mere two hours

Spa Experiences range from two hours (2 x 50-minute treatments and a 20-minute scrub or facial) right through to the ultimate pampering of the 10-hour Plenitude Ritual for two guests. There are Spa Day Passes which access everything from the hammams and saunas to hydromassages and the vitality pool. Treatments can also be booked individually. And there’s a choice of subscriptions so you can blend therapies to suit – I’m hoping for one of these in my Christmas stocking.

This time round I went for an energising scrub, Ko Bi Do lifting and plumping facial and a Lomi-Lomi inspired Polynesian massage. The facial also incorporated a massage technique and you can choose to have a body massage while your face mask is working its mysterious skin spells – just one of the many thoughtful touches our charming and highly skilled therapists wove effortlessly into the experience.

There’s plenty of room to relax before, during and after treatments and the flow between them is as much part of the ritual as the treatments themselves – shower to massage bed to soothing ginger tea to chill-space to the gorgeous spa pool; if you remember bring swim stuff, which I didn’t, but will next time. 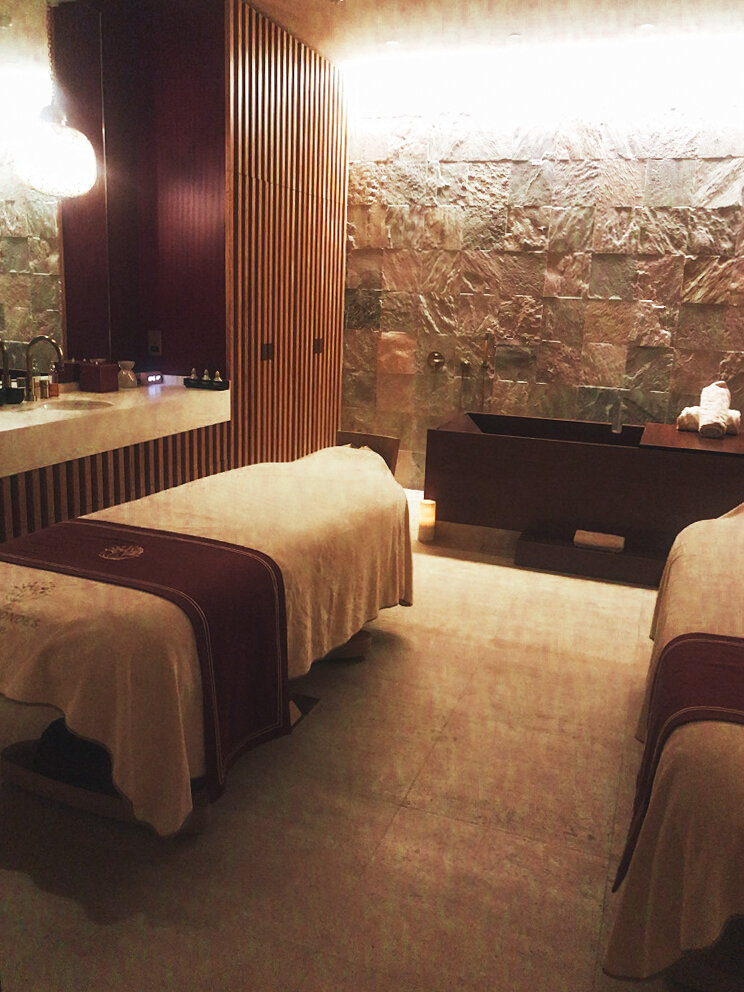 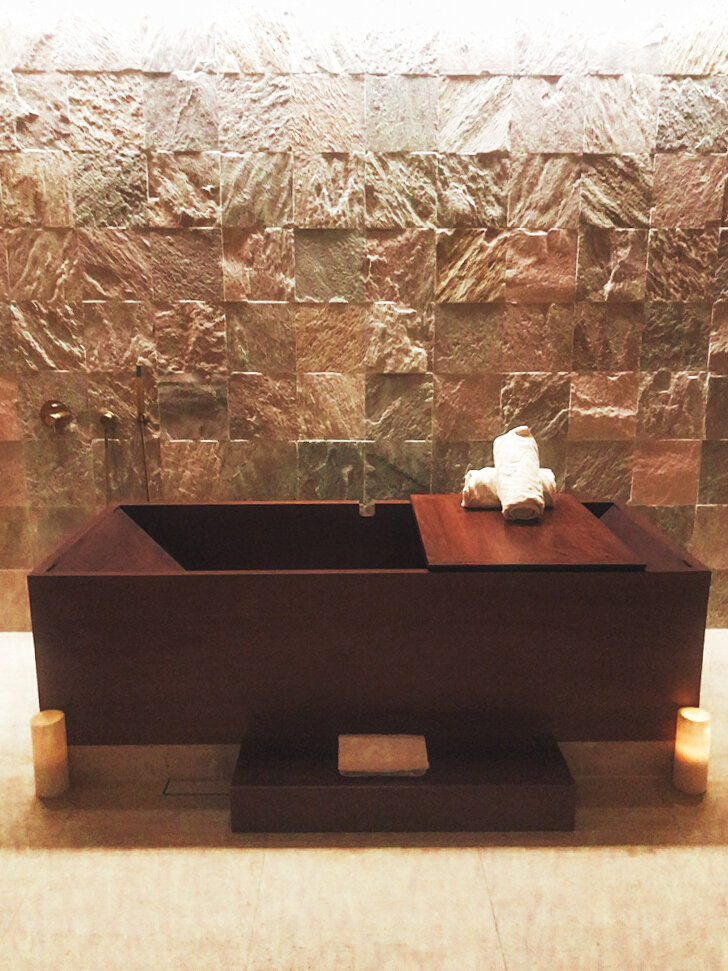 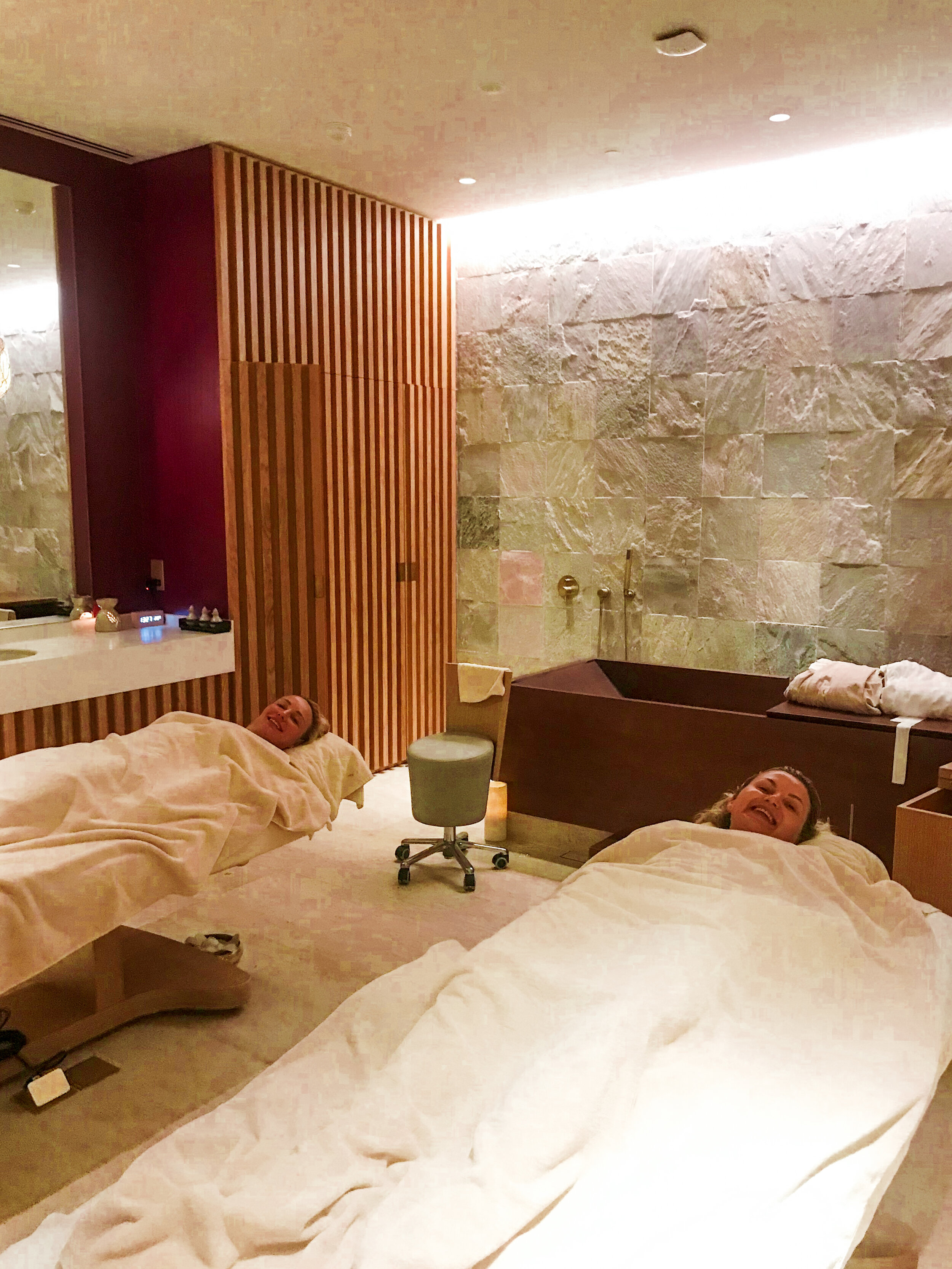 And there will be a next time: the atmosphere’s good, there’s no shortage of personal space and I would definitely feel comfortable going solo here, though couples and groups of friends were very much in evidence too.

What I would suggest is building in some extra time. Our initial plan was three hours. We ended up staying for five and having lunch in Blüthner Hall (one of the hotel’s eight restaurants).

And, as I said at the start, Cinq Mondes isn’t quite the ‘uber’  five-star spa it wants to be just yet. But I’ve no doubt with Neil Hewerdine in charge, and his eye on all the details, that’s about to change. 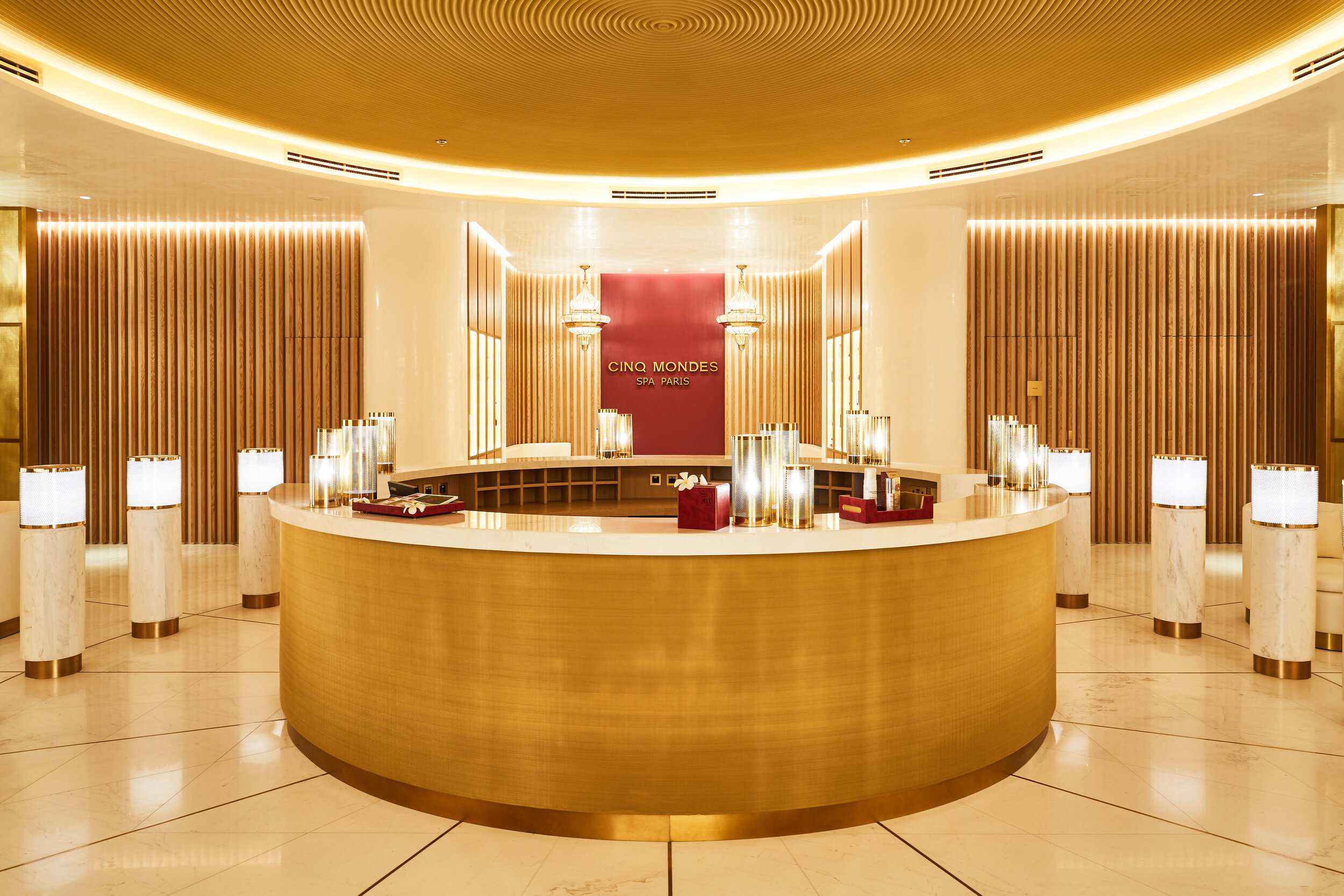 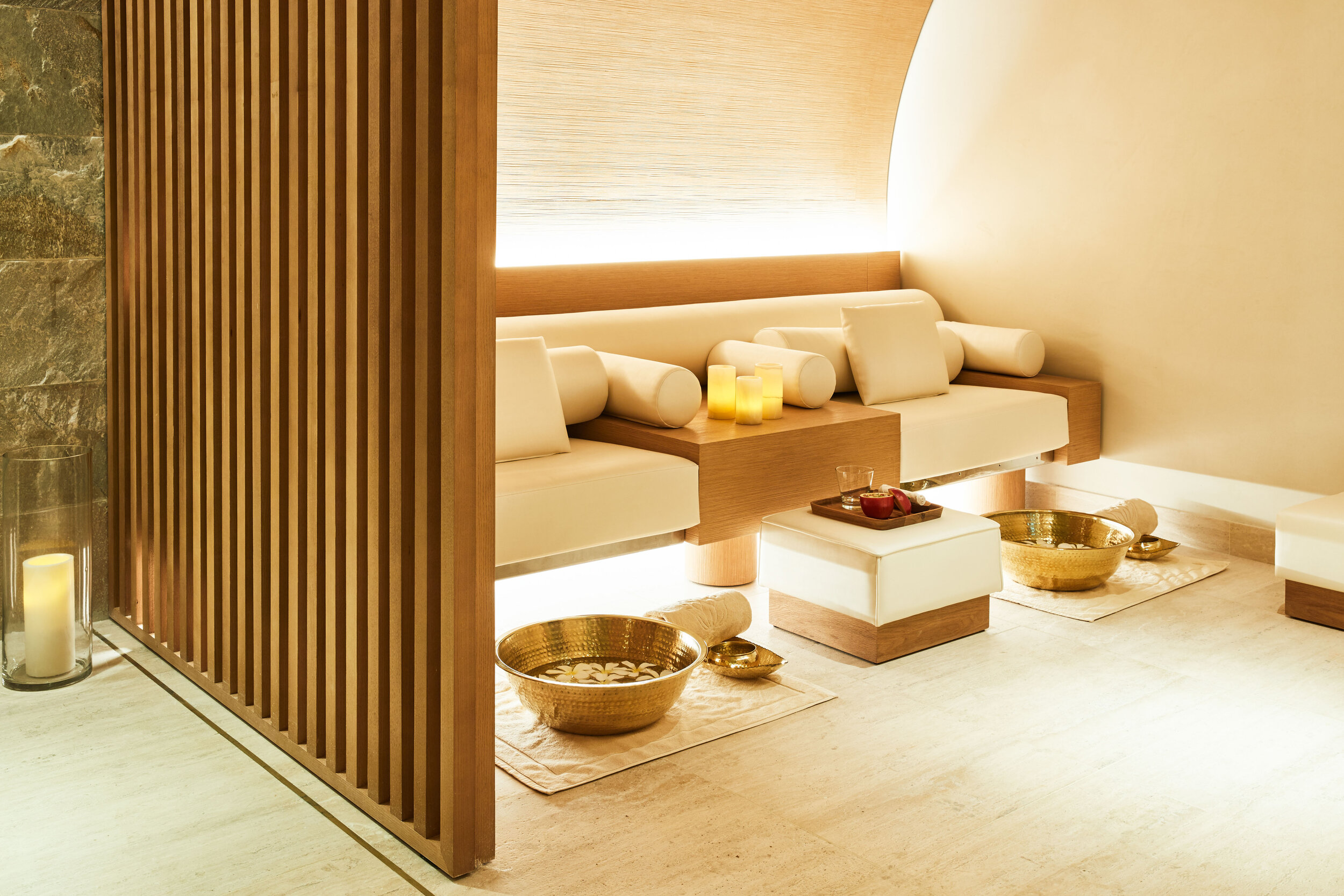 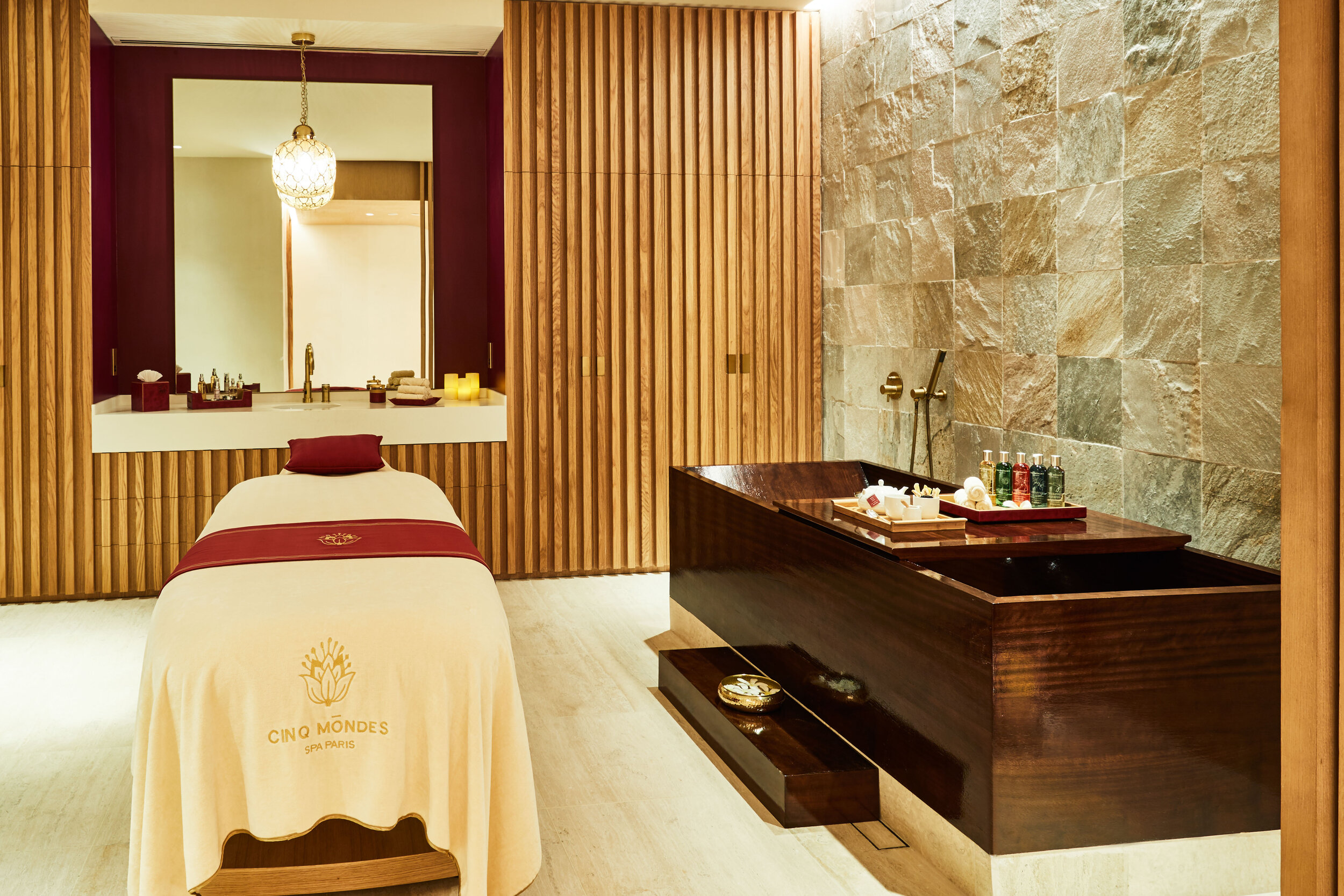 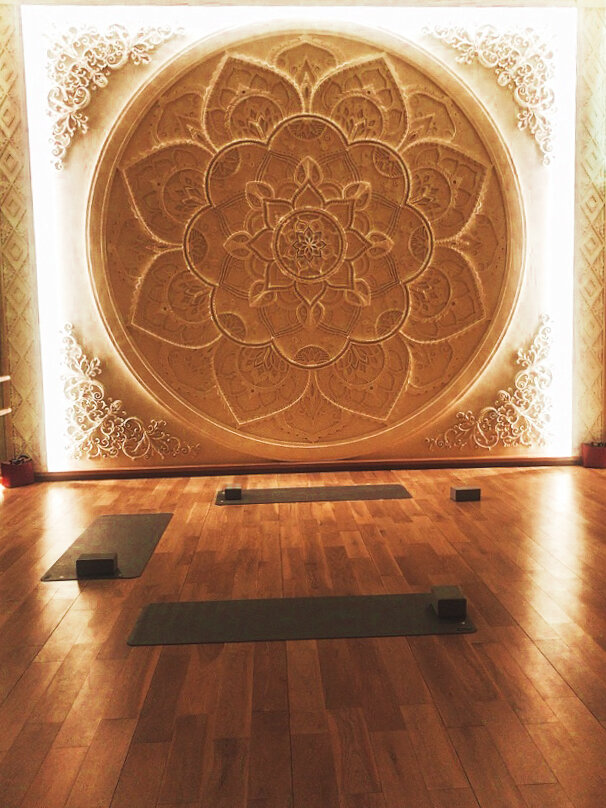 A Relaxing Getaway, including full-day access to the 500m private beach, fabulous hotel pool, as well as the use of all Cinq Mondes Spa facilities and a 50-minute massage, costs from 499AED per guest. There are heaps of other fabulous packages too, or you can design a personal experience – a great Christmas gift or a festive treat to share with someone you love or a me-time indulgence.